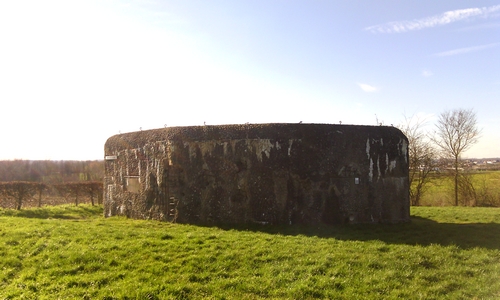 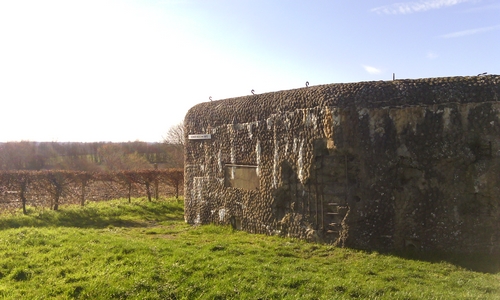 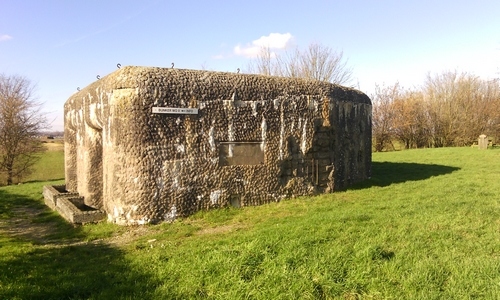 In the eve of the German invasion of Belgium an Iron wall was erected during the period 1939/1940. This resistance line was reinforced with steel barricades, barbed wire, rails, etc ... and ran in a zigzag pattern from the Dender river towards Meerbeke. This bunker in 1939 was part of the K (oningshooikt) -W(aver)-line, a branch of it ran from Wavre to the city of Pamel. The line served as a barrier to the German troops and this branch in Pamel was an obstacle in the direction of France. There stood four of these bunkers in this region, two small and two large which were interconnected by trenches. They were built so that their gun range overlapped.
The foundations of the bunker are 2 meters deep and the walls have a thickness of up to 1.30 meters. They are resistant to impacts of individual grenades up to 220 mm. The exterior was coated with cement studs, also named as "eggs" or "Tiroler nipples. The pattern forms a kind of canopy that served as camouflage. The upper side of the structure is smooth, but is provided with 16 hooks for the attachment of camouflage nets. There were 4 special sleeves that led the air inside the bunker but also made grenades that where thrown in rolled out again. At the top there is an opening for a periscope, together with a field telephone the bunker was connected with to the other bunkers nearby. The bunker had two doors where the inner door together with the outside formed a sas and so closed the gun rooms. There are inside three guns rooms located which each have three false and 3 real shooting holes.
The bunker was manned by seven men whom still definitely three stayed in the bunker. Only five days could the line be hold against the German force, on May 16, 1940 orders where given to withdrawn and retreat back to the Schelde-line.
At the end of 1941, the Iron wall was demolished by order of the Germans and the steel of the numerous barricades used here got a new destination, eg. as a barrier on the beach of Normandy. 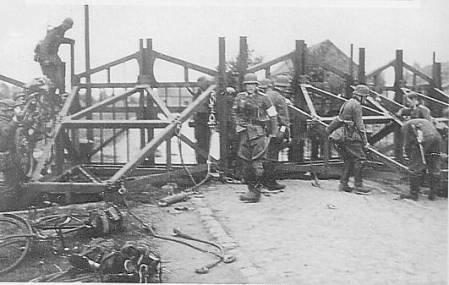