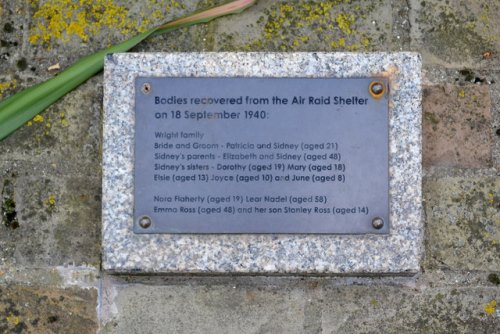 Text on the memorial:
This memorial stands above the Air Raid Shelter where a wedding party lost their lives on the afternoon of 17 September 1940.

Sidney and Patricia Wright had just married and were celebrating in the nearby 'Mother Redcap' public house with family and friends.

During an air raid, they sought refuge in the shelter which was directly hit by a bomb. All members of the Wright family and four other people were killed.

May they and all victims of War, rest in peace.

The plaque on the ground lists the bodies recovered from the shelter the next day.