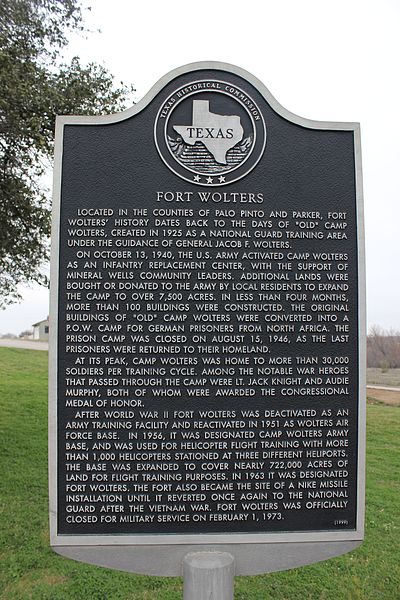 Text on the Texas Historic Marker:
Fort Wolters
Located in the counties of Palo Pinto and Parker, Fort Wolters' history dates back to the days of "Old" Camp Wolters, created in 1925 as a National Guard training area under the guidance of General Jacob F. Wolters.
On October 13, 1940, the U. S. Army activated Camp Wolters as an infantry replacement center, with the support of Mineral Wells community leaders. Additional lands were bought or donated to the army by local residents to expand the camp to over 7,500 acres. In less than four months, more than 100 buildings were constructed. The original buildings of "Old" Camp Wolters were converted into a P.O.W. camp for German prisoners from North Africa. The prison camp was closed on August 15, 1946, as the last prisoners were returned to their homeland.
At its peak, Camp Wolters was home to more than 30,000 soldiers per training cycle. Among the notable war heroes that passed through the camp were Lt. Jack Knight and Audie Murphy, both of whom were awarded the Congressional Medal of Honor.
After World War II Fort Wolters was deactivated as an army training facility and reactivated in 1951 as Wolters Air Force Base. In 1956, it was designated Camp Wolters Army Base and was used for helicopter flight training with more than 1,000 helicopters stationed at three different heliports. The base was expanded to cover nearly 722,000 acres of land for flight training purposes. In 1963 it was designated Fort Wolters. The fort also became the site of a Nike missile installation until it reverted once again to the National Guard after the Vietnam War. Fort Wolters was officially closed for military service on February 1, 1973.