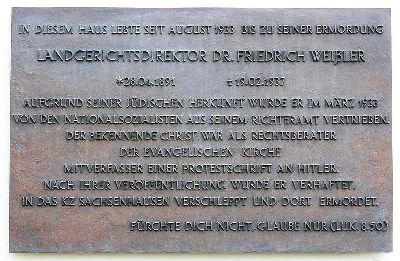 This plaque commemorates Friedrich Weißler, who lived here. He was a protestant christian of Jewish ancestry. In 1936 he was responsible for an public letter which criticized the persecutions and the concentration camps. Friedrich Weißler was arrested on 7 October 1936. After many torturings, he was murdered in Sachsenhausen, on 19 February 1937.