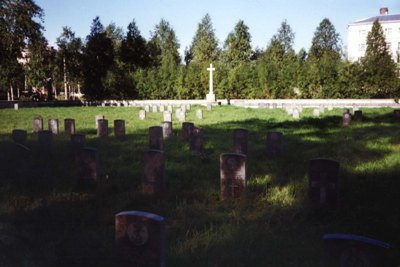 Archangelsk was one of the three harbours in North Russia used for the supply of goods during the First and the Second World War.

This war cemetery in constructed for Allied graves in the First World War. Now there are only Commonwealth graves. There are 224 graves from the First World War. Of these, 140 are special memorials for soldiers buried elsewhere in Russia. There are also 7 war graves from the Second World War.
The walls contain panels with the names of 219 servicemen who fell in the North Russia Campaign and who have no known grave.