The Battle of Libya: The First Phase

"Gentlemen, I am taking you into my confidence", General Sir Alan Cunningham, Commander of Britain's Eighth Army, told a group of war correspondents assembled at his desert headquarters on Sunday, November 16. "At dawn on Tuesday we will advance in Libya at selected places from the sea down to the oasis of Jarabub." Naval cooperation? Swift came the reply: "Perfect. I spoke to my brother about it."

Thirty-six hours later the offensive was launched. "Imperial Forces under the command of Lieutenant-General Sir Alan Cunningham, supported by formations of the R.A.F.. under Vice-Marshal Coningham", announced Cairo on the night of November 19, "began at first light on November 18 an advance into Cyrenaica from the coast east of Sollum as far south as Jarabub. While pressure was rapidly exerted on the Axis forces holding defensive positions from Halfaya to Sidi Omar, British armoured formations, supported by New Zealand, South African, and Indian troops, crossed the frontier south of Sidi Omar. So skilfully had our fighting troops been insinuated into their concentration areas, so good were the arrangements for deception, camouflage, and dispersal, coupled with the support of our air forces, that enemy observation and interference from the air prior to and during the advance yesterday were negligible. By yesterday evening, in heavy rain, our forces had penetrated over 50 miles into enemy territory. Up to that time little or no enemy opposition had been encountered."

When the battle began, General Rommel's forces comprised two German armoured divisions, ons Italian armoured division, and several divisions of Italian infantry. These were, for the most part, concentrated in the area between Tobruk and Sollum; report had it that Rommel was himself on the eve of launching an offensive. The British made no secret of the fact that their principal aim in the campaign was not the winning of territory  that could come later; the first and most important objective was the annihilation of the German panzer divisions. Cunningham's strategy was planned accordingly.

On the first day, as we have seen, the British armoured columns plunged through the wire on a 130-mile front, and swept west and north. By dark they were ranged along the escarpment from Sidi Omar to Bir el Gobi. On the next day they drove northwards, some making for Sidi Rezegh and Tobruk, while others raced past Sidi Omar in the direction of Bardia. There was a sharp brush at Gobi, where the Italian tanks were severely handled. Rezegh, 10 miles south-east of Tobruk's perimeter, was captured, although for some days yet it was to be the scene of fierce fighting. Meanwhile, the Bardia column had had a clash with a strong German tank force, in which the American light tanks, little 11-tonners, were in action for the first time; they were successful in tackling and driving off big German Mark 3 and Mark 4 tanks of 17 and 22 tons, with much heavier armament.

On the next day (November 20) Rommel threw into the fight the main German tank force which had been held back in reserve. There was a fierce struggle in the vicinity of Sidi Rezegh, and the Germans were reported to have lost 70 tanks and 33 armoured cars before they withdraw. At dawn on November 21 a column of British tanks sallied forth from Tobruk to join up with their comrades at Rezegh; but although they made considerable progress, the gap was not completely closed. In fact, the British at Rezegh were heavily engaged in an attempt to cut off the retreat of the main German tank force, estimated at about 180 tanks, which was endeavouring to cut its way out past El Adem. With tank columns closing in on them from three sides, and attacked at the same time from the air, the German column was soon in difficulties and was compelled to retreat towards the coast.

A vivid account of the fighting on that Friday norming came from a R.A.F. fighter pilot who flew at 4,000 feet above the battle. "Guns were blazing on all sides as these land cruisers made for each other", he said. "It was impossible to pick out from our position which was which. Most of them were on the move, but there were several stationary and no longer firing. Several hundreds of them appeared engaged in a grim show-down. It must have been a concentrated hell of shell against shell and steel against steel. It was like looking down on some huge prehistoric area with fire-breathing, scaly-hided monsters pitted against each other in a terrific struggle, lumbering slowly forward, swinging this way and that, each intent upon the destruction of the other."

By now much of the ground in the neighbourhood of Sidi Omar had been cleared of the enemy tanks, and so it was possible to develop a thrust towards the coast at Bardia. New Zealand forces, in the face of exceptional climatic difficulties  it had been raining hard for some days so that the desert sands were churned into a sticky morass  stormed Fort Capuzzo and Sidi Aziz, and occupied Bardia, which was reported clear of the enemy. At the same time Indian troops made some progress between Halfaya Pass and Sidi Omar.

But the main battle was still in the vicinity of Sidi Rezegh, where the British and German tanks were battling furiously. Wrote Guy Harriot, of the "Daily Telegraph", who was there:

"The enemy tanks were firing with everything they had storming forward at full speed with shells from their artillery bursting in front of them. Our gunners, firing at point-blank range as fast as they could load, smashed their shells into tank after tank, blowing off their tracks and ripping their sides. Nor armour in the world could withstand gunfire at that range."

"Some of the tanks crashed to a halt in ruins almost on the muzzles of our guns. Others, hard hit, tried to limp away. The charge wavered and broke. Grey-brown-clad figures leapt from the turrets of their shattered tanks and ran aimlessly across the littered desert."

At this stage of the fighting commentators in Cairo and London expressed the opinion that the first phase of the battle was over. Cunningham had succeeded in his first objective: he had, that is, split the enemy forces into fragments, since one group was centred about Sollum, another near Gambut (which was captured by the New Zealanders on November 24), a third was south of Tobruk, while a fourth was near El Gobi. The second phase was about to begin Annihilation was the watch word.

The operation described is Operation Crusader, read about the second phase in the next article. 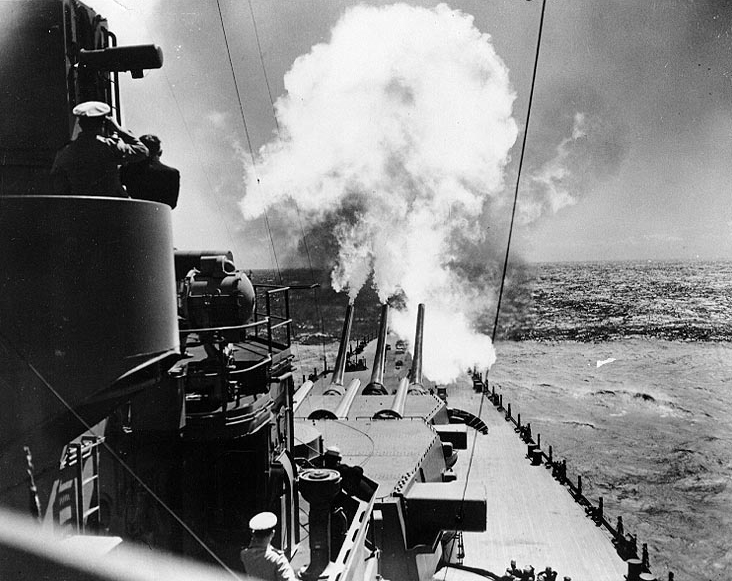 U.S.S. North Carolina, mighty American battleship, firing a salvo from the triple 16-inch guns of her forward turret. First to be completed of six battleships of the Washington class, the North Caro

Although it is not yet possible to write a complete account of the great battle of the Western Desert, sufficient information has come to hand to form a picture of the operations which constituted the