Fierce and Bloody Battle in the Java Sea

The Battle of the Java Sea was heavy defeat for the United Nations, since all but one of the thirteen warships of the Allied squadron that went into action against the Japanese were sent to the bottom. Here is the story, reminiscent in its grimness of Jutland 26 years ago, as told in an Admiralty communiqué issued on March 14.

Although full information is not yet available, it is now possible to give some account, so far as particulars are at present to hand, of the events in the Java Sea, on Feb. 27 and subsequent days, during the Japanese invasion of Java.

On the afternoon of Friday, Feb. 27, an Allied force, consisting of H.M.A.S. Perth (Captain H. M. L. Waller, D.S.O., R.A.N.), H.M.S. Exeter (Captain O. L. Gordon, M.V.O., R.N.), the United States cruiser Houston, and the Dutch cruisers De Ruyter and Java, was at sea north of Surabaya. The Allied cruisers were accompanied by the destroyers H.M.S. Electra (Commander C. W. May, R.N.), H.M.S. Jupiter (Lt.-Com. J. V. J. T. Thew, R.N.), and H.M.S. Encounter (Lt.-Com. E. V. St. J. Morgan, R.N.), and the Dutch destroyer Kortenaer. This force was under the sea command of Admiral Doorman, whose flag was flying in the De Ruyter. The whole naval force in the area was under the strategical control of Admiral Helfrich, of the Royal Netherlands Navy.

At 4.14 p.m. on Feb. 27 this Allied force made contact with a Japanese force about half-way between Bawean Island and Surabaya. The Japanese force consisted of at least two Nati class cruisers of 10,000 tons armed with ten 8-in. guns, and a number of other cruisers. The Japanese cruisers had with them thirteen destroyers organized in two flotillas.

Action was joined at extreme range. Almost at once one of the Japanese destroyer flotillas launched an attack, but this was driven off by the fire of the Allied cruisers, and on of the enemy destroyers was seen to be hit by shells from H.M.A.S. Perth. Soon afterwards the other Japanese destroyer flotilla delivered a torpedo attack. While action was being taken to avoid these torpedoes, H.M.S. Exeter was hit by an 8-inch shell in a boiler-room. This reduced her speed and forced her to drop out of the line. Only one of the torpedoes launched in this attack took effect. This hit the Dutch destroyer Kortenaer, and she sank.

The three British destroyers were ordered to counter-attack the Japanese destroyers, who were retiring under cover of a smoke screen. Very little information is available about the result of this counter-attack. H.M.S. Jupiter reported seeing only two enemy destroyers, both of which she engaged with gunfire. H.M.S. Electra was not seen after she had disappeared into the smoke screen, and it is presumed that she was sunk.

As soon as the Allied cruisers, except H.M.S. Exeter, who was unable to keep up, drew clear of the smoke, they again engaged the enemy, this time at shorter range. Less than half-an-hour later the enemy cruisers turned away under cover of a smoke screen. It was seen that one of the enemy heavy 8-in. gun cruisers had been hit aft, and was burning fiercely. Admiral Doorman led his force round, and chased the enemy to the north-eastward, but he failed to regain touch with them in the fading light.

The Japs had 105 Warships

From the outset we sought the offensive and struck the aggressor blow upon blow during the period in which the Outer Provinces, where less strong defences were disposed, were lost one after the other as had been foreseen.

Java, the barrier, remained. It remained until Friday and Saturday, Feb. 27 and 28, 1942, when Helfrich then in command of the joint naval forces, was forced to battle with a Japanese armada convoying 60 troop carriers on their way to the north coast of Java. At that moment the Japanese had 14 cruisers, 55 destroyers, 25 submarines, 5 aircraft-carriers and 6 seacraft-carriers, i.e. more than 100 warships, in our East Indian waters.

The battle against the Japanese fleet had success, but the attempt against the troop-carriers, which were shielded by a front of submarines, failed. A large part of the Allied fleet, the strength of which was less than one-third of the enemy's naval forces, was lost.

After nightfall the Allied cruisers sighted four enemy ships to the westward, and engaged them, with what results is not known. Admiral Doorman attempted to work round these enemy ships in order to locate the convoy, which was expected to be to the northward. This was found to be impracticable owing to the high speed of the enemy, and Admiral Doorman then turned his force to the southward to close the coast of Java, intending to sweep to the westward along the coast in an attempt to intercept the Japanese invasion convoys.

Half-an-hour after the Allied force had turned to the westward along the coast of Java H.M.S. Jupiter was disabled by an under-water explosion. She sank four hours later. H.M.S. Jupiter was not far from the mainland of Java, and a number of survivors have already reached Australia.

It is impossible to asses with accuracy the damage inflicted upon the enemy during the actions on Feb. 27. Observers in H.M.A.S. Perth considered that one Japanese 8-in. gun cruiser had been sunk, a second 8-in. gun cruiser damaged, and a destroyer sunk. It has also been reported that a cruiser of the Mogami class (8,500 tons, fifteen 6.1-in. guns) was set on fire, and three destroyers seriously damaged and left on fire or sinking. H.M.A.S. Perth, who had received some damage, reached Tanjong Priok at seven o'clock in the morning of Saturday, Feb. 28. With the enemy in command of the sea and air north of Java in overwhelming force, the Allied Command was faced with the problem of extricating the remaining Allied ships from a very dangerous situation. The way to Australia was barred by the 600 miles long island of Java, with the straits at either end of it under enemy control.

After dark on Feb. 28 H.M.A.S. Perth left Tanjong Priok with the intention of passing through the Sunda Strait during the dark hours. During the nigh a report was received from H.M.A.S. Perth which indicated that she had come into contact with a force of Japanese ships off St. Nicolas Point at about 1 p.m. Nothing, however, has been heard of H.M.A.S. Perth or the U.S. cruiser Houston since that time.

The same night H.M.S. Exeter, who was unable to exceed half speed, left Surabaya accompanied by H.M.S. Encounter and the U.S. destroyer Pope. At forenoon on Sunday, March 1, H.M.S. Exeter reported that she had sighted three enemy cruisers steering towards her. No further signals were received from H.M.S. Exeter, H.M.S. Encounter, or the U.S. destroyer Pope. The Dutch destroyer Evertsen encountered two Japanese cruisers in the Sunda Strait. She was damaged and was beached. The destroyer H.M.A.S. Stronghold (Lt.-Com. G. R. Pretor-Pinney, R.N.) and the sloop H.M.S. Yarra (Lt.-Com. R. W. Rankin, R.A.N.), are also missing and must be considered lost. It has not been possible to form any estimate of the damage inflicted on the enemy by these ships during their last actions. 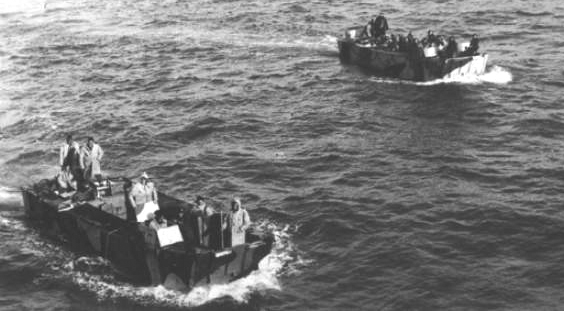 Just four weeks after the raid on Bruneval, another combined operation was delivered on March 27-28, this time against the Nazi U-boat base at St. Nazaire. What follows is based on the official commun