THE PRESIDENT: I call upon the Defendant Hans Frank.

HANS FRANK (Defendant): Your Honors: Adolf Hitler, the chief defendant, left no final statement to the German people and the world. Amid the deepest distress of his people he found no comforting word. He became silent and did not discharge his office as a leader, but went down into darkness, a suicide. Was it stubbornness, despair, or spite against God and man? Perhaps as though he thought: "'If I must perish, then let the German people fall into the abyss also''. Who will ever know?
We - and if I now use the term ''we,'' then I mean myself and those Nationalsocialists who will agree with me in this confession, and not those fellow-defendants on whose behalf I am not entitled to speak - we do not wish to abandon the German nation to its fate in the same way without a word; we do not wish to say simply: " Now you will just have to see how you can get along with this collapse which we have left you". Even now, perhaps as never before, we still bear a tremendous spiritual responsibility.
At the beginning of our way we did not suspect that our turning away from God could have such disastrous deadly consequences and that we would necessarily become more and more deeply involved in guilt. At that time we could not have known that so much loyalty and willingness to sacrifice on the part of the German people could have been so badly directed by us.
Thus, by turning away from God, we were overthrown and had to perish. It was not because of technical deficiencies and unfortunate circumstances alone that we lost the war, nor was it misfortune and treason. Before all, God pronounced and executed judgment on Hitler and the system which we served with minds far from God. Therefore, may our people too, be called back from the road on which Hitler - and we with him - have led them.
I beg of our people not to continue in this direction, be it even a single step; because Hitler's road was the way without God, the way of turning from Christ and, in the last analysis, the way of political foolishness, the way of disaster and the way of death. His path became more and more that of a frightful adventurer without conscience or honesty, as I know today at the end of this Trial.
We call upoin the German people, whose rulers we were, to return from this road which, according to the law and justice of God, had to lead us and our system into disaster and which will lead everyone into disaster who tries to walk on it, or continue on it, everywhere in the whole world.
Over the graves of the millions of dead of this frightful second World War this state trial was conducted, lasting for many months, as a central, legal epilogue and the spiirits passed accusingly through this room.
I am grateful that I was given the opportunity to prepare a defense and justification against the accusations raised against me.
In this connection I am thinking of all the victims of the violenc'e and horror of the dreadful events of war. Millions had to perish unquestioned and unheard. I surrendered my war diary, containing my statements and activities, in the hour when I lost rny liberty. If I was really ever severe, then it was above all toward myself, at thi moment when my actions in the war were made public.
I do not wish to leave any hidden guilt which I have not accounted for behind me in this world. I assumed responsibility on the witness stand for all those things for which I must answer. I have also acknowledged that degree of guilt which attaches to me as a champion of Adolf Hitler, his movement, and his Reich.
I have noithing to add to the words of my defense counsel.
There is still one statement of mine which I must rectify. On the witness stand I said that a thousand years would not suffice to erase the guilt brought upon our people because of Hitler's conduct in this war. Every possible guilt incurred by our nation has already been completely wiped out today, not only by the conduct of our wartime enemies towards our nation and its soldiers, which has been carefully kept out of this Trial, but also by the tremendous mass crimes of the most frightful sort which - as I have now learned have been and still are being committed against Germans by Russians, Poles and Czechs, especially in East Prussia, Silesia, Pomerania, and Sudetenland. Who shall ever judge these crimes against the German people?
I end my final statement in the sure hope that from all the horrors of the war and all the threatening developments which are already appearing everywhere, a peace may perhaps still arise in whose blessings even our nation may be able to participate.
But it is God's eternal justice in which I hope our people will be secure and to which alone I trustfully submit.

mine
An object filled with explosives, equipped with detonator which is activated by either remote control or by colliding with the targeted object. Mines are intended to destroy of damage vehicles, aircrafts or vessels, or to injure, kill or otherwise putting staff out of action. It is also possible to deny enemy access of a specific area by laying mines. 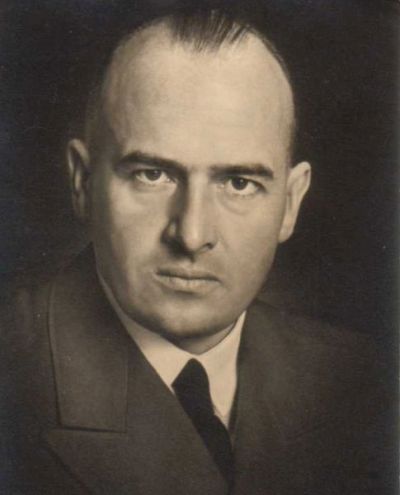