THE PRESIDENT: I call upon the Defendant Baldur von Schirach.

BALDUR VON SCHIRACH (Defendant): On 24 May I made a statement here for which I answer before God and my conscience and which I fully uphold, even today at the end of the Trial because it is in accordance with my honest innermost conviction.
In their final speech the British Prosecution made the following statement:"Von Schirach corrupted millions of German children so that they became what they really are today, the blind instruments of that policy of murder and domination which these men have carried out".
If this charge were justified I would not say a word in my defense. However, it is not justified; it is untrue. Whoever in any way takes into consideration the results of the evidence in this Trial, and honestly appraises it, can never under any circumstances raise the accusation against me that I had corrupted the youth and poisoned their souls through my educational work. The principles and aims which I set for youth and which were binding on the community which our youth built up with their own strength under my leadership, were the following: self-sacrificing love of the fatherland, the overcoming of social snobbery and class hatred, planned health supervision, physical training by means of hiking, game and sports, promotion of professional education and particularly, comradely understanding with the youth of other countries. Ever since my own youth I have kept these principles and aims before my eyes as the idea of a national German education. These principles and aims were not dictated to me by the Party or by the State and if Hitler were present here this would be completely unimportant for my defense, because as German Youth Leader I do not appeal to his authority, but to my own.
These educational principles however, which were demonstrated a thousand times in all my speeches, writings and directives and to which as Reich Youth Leader I have always remained faithful, are according to my firm conviction, the principles of every leader of youth who is conscious of his duty toward his people and its youth. The achievements of our youth and its moral attitude have proved me right and prove that it was never corrupt and was not corrupted by me either. German youth was and is industrious and decent, honest and idealistic. In peace it contributed honorably towards its higher education and in war it bravely did its duty towards our nation, for our German fatherland, to the utmost.
In this hour, when I can speak for the last time to the Military Tribunal of the four victorious powers, I would like, with a clear conscience, to confirm the following on behalf of our German youth: that it is completely innocent of the abuses and degeneration of the Hitler regime which were established during this Trial, that it never wanted this war and that neither in peace nor in war did it participate in any crimes. As the leader of German youth for many years, I know the development, the opinions and the conduct of our younger generation. Who could know it better than I? I always had my friends amongst this youth; in their midst I was always happy and at all times I have been proud of them.
I knew that in all the years when I was Reich Youth Leader, in spite of the fact that its membership counted miillions, the youth, as a matter of principle and without exception, kept itself apart from any actions of which it would have to be ashamed today. It knew nothing of the innumerable atrocities which were committed by Germans; and just as it knew of no wrongs, it did not wish any wrong. It cannot and must not be overlooked that even during the greatest embitterment of the period following the war, nobody could consider indicting the organization of German youth and its leaders as criminal. Unselfish comradeship in a youth movement which showed the greatest love for the poorest children of the people, loyalty to the homeland, pleasure in sport and honest understanding with the youth of other nations, that was the aim of our youth and the content of its training from the first to the last day of my term as Reich Youth Leader. This youth has not deserved the hard fate which has come upon it.
My personal fate is of secondary importancle, but youth is the hope of our nation. And if I may express a wish in this last moment, then it is this: "Will you, as judges, help to remove the distorted picture of German youth which the world still has today in many places and which cannot stand up under historical investigation? Tell the world in your judgment that the libelous writings of a Gregor Ziemer used by the Prosecution contain nothing but the evil slanders of a man who has extended his hatred against everything German to German youth also. Will you, as judges, also help so that the youth organizations of your nations will once more resume their co-operation with the German youth at the point where, through no fault of the younger generation, it was interrupted in 1939?"
With a grateful heart our youth has listened to the words of Lord Beveridge who has advocated, with farsightedness and passion, that German youth be declared free of guilt. Joyfully it will grasp the hand which is stretched out to it across the ruins and debris.
May you, Gentlemen of the Tribunal, contribute through yourJudgment towards creating an atmosphere of mutual respect among the younger generation, an atmosphere which is free of hatred and revenge.
That is my last request, a heartfelt request on behalf of our German youth!

moral
The will of the troops/civilians to keep fighting. 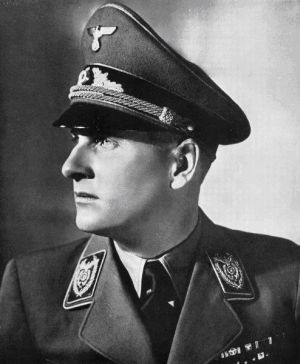