Von Schirach is indicted under Counts One and Four. (explanation). He joined he Nazi Party and the SA in 1925. In 1925, he became the leader of the Nationalsocialist Students Union. In 1931 he was made Reichsjugendleiter of the Nazi Party with control over all Nazi youth organizations including the Hitler Jugend. In 1933, after the Nazis had obtained control of the government, Von Schirach was made Leader of Youth in the German Reich, originally a position within the Ministry of the Interior but after 1 December 1936, an office in the Reichskabinett. In 1940, Von Schirach resigned as head of the Hitler Jugend in the German Reich but retained his position as Reichsleiter with control over Youth Education. In 1940, he was appointed Gauleiter of Vienna and Reichsverteidigungskommissar for that territory.

After the Nazis had come to power Von Schirach, utilizing both physical violence and official pressure, either drove out of existence or took over all youth groups which competed with the Hitler Jugend. A Hitler decree of 1 December 1936 incorporated all German youth within the Hitler Jugend. By the time formal conscription was introduced in 1940, 97 percent of those eligible were already members. Von Schirach used the Hitler Jugend to educate German youth "in the spirit of Nationalsocialism"' and subjected them to an intensive program of Nazi propaganda. He established the Hitler Jugend as a source of replacements for the Nazi Party formations. In October 1938 he entered into an arrangement with Himmler under which members of the Hitler Jugend who met SS standards would be considered as the primary source of replacements for the SS.
Von Schirach also used the Hitler Jugend for premilitary training. Special units were set up whose primary purpose was training specialists for the various branches of the service. On 11 August 1939, he entered into an agreement with Keitel under which the Hitler Jugend agreed to carry out its premilitary activities under standards laid down by the Wehrmacht and the Wehrmacht agreed to train 30,000 Hitler Jugend instructors each year. The Hitler Jugend placed particular emphasis on the military spirit and its training program stressed the importance of the return of the colonies, the necessity for Lebensraum, and the noble destiny of German youth to die for Hitler.
Despite the warlike nature of the activities of the Hitler Jugend however, it does not appear that Von Schirach was involved in the development of Hitler's plan for territorial expansion by means of aggressive war, or that he participated in the planning or preparation of any of the wars of aggression.

In July 1940, Von Schirach was appointed Gauleiter of Vienna. At the same time he was appointed Reich Governor for Vienna and Reichsverteidigungskommissar, originally for Military District 17, including the Gaue of Vienna, Upper and Lower Danube and, after 17 November 1942, for the Gau of Vienna alone. As Reich Defense Commissioner, he had control of the civilian war economy. As Reich Governor he was head of the municipal administration of the City of Vienna and, under the supervision of the Minister of the Interior, was in charge of the governmental administration of the Reich in Vienna.
Von Schirach is not charged with the Commission of War Crimes in Vienna, only with the Commission of Crimes against Humanity. As has already been seen, Austria was occupied pursuant to a common plan of aggression. Its occupation is, therefore, a crime within the jurisdiction of the Tribunal, as that term is used in Article 6(c) of the Charter. As a result, "murder, extermination, enslavement, deportation, and other inhumane acts" and "persecutions on political, racial or religious grounds" in connection with this occupation constitute a Crime against Humanity under that Article.
As Gauleiter of Vienna, Von Schirach came under the Sauckel decree dated 6 April 1942, making the Gauleiter Sauckels plenipotentiary for manpower with authority to supervise the utilization and treatment of manpower within their Gaue. Sauckel's directives provided that the forced laborers were to be fed, sheltered and treated so as to exploit them to the highest possible degree at the lowest possible expense.
When Von Schirach became Gauleiter of Vienna the deportation of the Jews had already begun and only 60,000 out of Viennas original 190,000 Jews remained. On 2 October 1940, he attended a conference at Hitler's office and told Frank that he had 50,000 Jews in Vienna which the Government General would have to take over from him. On 3 December 1940, Von Schirach received a letter from Lammers stating that after the receipt of the reports made by Von Schirach, Hitler had decided to deport the 60,000 Jews still remaining in Vienna to the Government General because of the housing shortage in Vlenna. The deportation of the Jews from Vienna was then begun and continued until the early fall of 1942. On 15 September 1942, Von Schirach made a speech in which he defended his action in having driven "tens of thousands upon tens of thousands of Jews into the ghetto of the East as contributing to European culture".
While the Jews were being deported from Vienna, reports addressed to him in his official capacity, were received in Von Schirach's office from the office of the Chief of the Security Police and SD, which contained a description of the activities of Einsatzgruppen in exterminating Jews. Many of these reports were initialed by one of Von Schirach's principal deputies. On 30 June 1944, Von Schirach's office also received a letter from Kaltenbrunner, informing him that a shipment of 12,000 Jews was on its way to Vienna for essential war work and that all those who were incapable of work would have to be kept in readiness for "special action".
The Tribunal finds that Von Schirach, while he did not originate the policy of deporting Jews from Vienna, participated in this deportation after he had become Gauleiter of Vienna. He knew that the best the Jews could hope for was a miserable existence in the ghettos of the East. Bulletins describing the Jewish extermination were in his office.
While Gauleiter of Vienna, Von Schirach continued to function as Reichsleiter for Youth Education and in this capacity he was informed of the Hitler Jugend's participation in the plan put into efiect in the fall of 1944 under which 50,000 young people between the ages of 10 and 20 were evacuated into Germany from areas recaptured by the Soviet forces and used as apprentices in German industry and as auxiliaries in units of the German Armed Forces. In the summer of 1942, Von Schirach telegraphed Bormann urging that a bombing attack on an English cultural town be carried out in retaliation for the assassination of Heydrich which, he claimed, had been planned by the British.

The Tribunal finds that Von Schirach is not guilty on Count One. He is guilty under Count Four.

Crimes against Humanity
Term that was introduced during the Nuremburg Trials. Crimes against humanity are inhuman treatment against civilian population and persecution on the basis of race or political or religious beliefs.
Einsatzgruppen
Taskforces of Deployment Squads. Special units composed of various SS and police services under supervision of the Reichssicherheitshauptamt (RSHA). Einsatzgruppen were deployed during the invasion of Poland in 1939 and during operation Barbarossa in 1941. In 1939 these units were ordered to eliminate the Polish intelligentsia. In the Soviet Union they were deployed to execute various political and racial enemies of the Third Reich, like Jews, gypsies and communists. The Holocaust by bullets in the Soviet Union was the horrendous first act of the eventual final solution.
Gau
Shire. District in the Third Reich established by the NSDAP.
Gauleiter
Leader and representative of the NSDAP of a Gau.
ghetto
Part of a town separated from the outside world to segregate Jewish population. The establishment of ghettos was intended to exclude the Jews from daily life and from the rest of the people. From these ghettos it was also easier to deport the Jews to the concentration and extermination camps. Also known as Judenviertel or Jewish quarter.
Jews
Middle Eastern people with own religion that lived in Palestine. They distinguished themselves by their strong monotheism and the strict observance of the Law and tradition. During World War 2 the Jewish people were ruthlessly persecuted and annihilated by the German Nazis. . An estimated 6,000,000 Jews were exterminated.
Lebensraum
Living space. Nazi term indicating the need for the overpopulated German lands to expand.
Nazi
Abbreviation of a national socialist.
propaganda
Often misleading information used to gain support among supporters or to gain support. Often used to accomplish ideas and political goals.
War Crimes
Crimes committed in wartime. Often concerning crimes committed by soldiers against civilians.
Wehrmacht
German armed military forces, divided in ground forces, air force and navy. 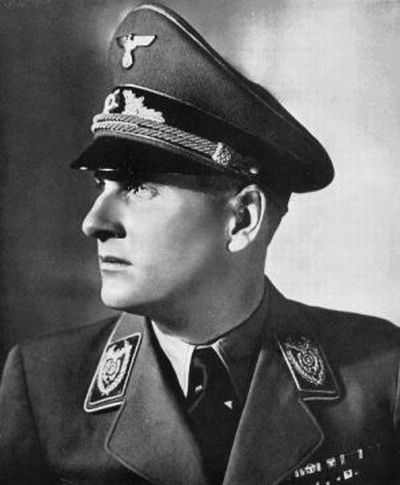 Baldur von Schirach, leader of the Hitlerjugend and Gauleiter of Vienna.