Albert Kesselring was born November 30, 1885 in Marktsteft in the region of Unterfranken in Bavaria. He was the son of a teacher. Kesselring attended school in Bayreuth. He entered service with the Bavarian artillery in 1904, was promoted to Leutnant and placed in command of a shock troop. In 1910 he married Pauline Keyssler. In 1952, they adopted a son.

In the course of World War One he was promoted to Colonel. He had had enough of the artillery and the air force appealed to him. He became observer in a balloon and rose through the ranks. Towards the end of the war, he joined the staff of the air force. Here he met Hermann Göring .

After World War One had ended and because Germany was no longer allowed to have an air force, pursuant to the Treaty of Versailles, Kesselring returned to the artillery. October 1st, 1933, he was officially discharged from the army in order to secretly rebuild the Luftwaffe. He was given the title of Reichskommissar für den Luftverkehr (State Commissioner for Aviation). In 1936 he was admitted again to the staff of the German army as Chief of Staff of the Luftwaffe. He remained at this post until early 1937 when he was side tracked somewhat.

Göring wanted to be in command of the Luftwaffe at all costs. This was to Kesselrings disadvantage causing a breach in their friendship. Things never got right again between the two men. Kesselring was in command of Luftkreis III, Dresden and was placed in command of Luftkreis I, Berlin in 1938. In the meantime, he wrote articles and manuals on how to attack ground targets. He became an expert in this field. It was no coincidence therefore that Kesselring became involved in the development of the notorious STUKA, a dive-bomber that was to become extremely important attacking ground targets later on.

When World War Two broke out in 1939, Kesselring was rehabilitated. He was to provide air support over Poland and to direct attacks on ground targets. For this he was awarded the Ritterkreuz (Knights Cross). In Norway, he held the same post as in Poland. When the Germans invaded the Low Countries, he was responsible for the destruction of the Allied air forces on the ground. Most of the Belgian and Dutch aircraft were destroyed before they had a chance to take off. Kesselring also was the one who ordered the bombardment of Rotterdam resulting in the entire inner city being utterly destroyed. This bombardment caused the Dutch army to surrender as they wanted to prevent more cities from being bombed. All this led to his promotion to Generalfeldmarschall.

In July 1940, Luftflotte II (Air armada) was founded. Kesselring was promoted to Feldmarschall and placed in command of the unit. Its strategic task was to defeat the R.A.F. In this, he failed however. When the Germans launched Operation Barbarossa in the summer of 1941, Kesselring and his unit were transferred to the Eastern front and placed under command of General Fedor von Bock and charged with providing air cover to Heeresgruppe Mitte (Army group Center).

At the close of 1941, Kesselring was appointed ObS (Oberbefehlshaber, supreme commander south), making him responsible for the North-African theatre as well as the Mediterranean. A few months later, in early 1942, Kesselring was ordered to capture the island of Malta using airborne troops as Feldmarschal Erwin Rommels supply lines in Africa were continuously under attack from air fields on this island. Hitler hesitated though, on the one hand, Malta had to be captured, yet on the other hand, this would exert much from the parachutists. These troops had already suffered huge losses on the island of Crete and Hitler knew his forces did not possess sufficient reserves to replenish that kind of losses once more. Therefore, the landings were postponed time and again until the summer of 1942. In the end, postponement led to cancellation. After many bombing attacks, Kesselring reported on May 10th the island had been neutralized and on May 21st, the plan to capture Malta was definitely swept aside by Hitler.

On December 1st, 1942, on occasion of the Allied landing in North-Africa (Operation Torch) his authority was extended to encompass all Axis air forces in Italy and North-Africa. After the Afrika Korps had been defeated, a good commander capable of containing the Allies in the south was urgently required. As many other officers were serving on the Eastern front, Kesselring seemed to be the right man. On November 21st, 1943, he was appointed Ob Südwest.

Kesselring was powerless against the overwhelming Allied supremacy in the air. When the invasion of Sicily (Operation Husky) was launched, he had some 1,000 aircraft at his disposal in the area. The Allied advanced proceeded so fast however that most aircraft were lost. Kesselring soon realized he would be unable to hold out on Sicily for long. In some sort of mini-Dunkirk he withdrew the German units across the Strait of Messina to Italy. The retreat however was a well planned evacuation; not only equipment was recovered but important fuel as well he would gratefully use for the retreat to the Gustav line.

He managed to inflict serious losses on the Allied landing troops at Anzio in 1944 however, despite the minority in the air. He succeeded in preventing the Allies from breaking out of their bridgehead but three of his best divisions he could otherwise have held in reserve. were tied down in the process. He also succeeded in holding up the Allies at the Gustav line for a considerable time. He had this line constructed in the winter of 1943. The Allies were held up for months, for instance at Monte Cassino. Even after the line was breached in March 1944 and Rome was captured, he managed to set up a new line (Winter line) in order to impede the advance of the Allies. American forces commanded by General Mark Clark met considerable resistance in their efforts to establish a bridgehead at Salerno. They barely managed to hold ground.

In March 1944, he received the necessary equipment to recapture the islands in the Adriatic Sea occupied by deserted Italian units. He also was closely involved in the liberation of the Italian dictator Benito Mussolini who was imprisoned in a hotel on Gran Sasso mountain. He provided the necessary paratroops.

Due to his strong defense, Kesselring managed to prevent the Allies from entering Germany from Italy. For this great achievement, he was awarded the Diamanten (Diamonds) to his Ritterkreuz mit Eichenlaub und Schwerter (Oak Leaves and Swords) he had received earlier. He was succeeded in Italy by General von Viettinghoff after having been seriously injured during a visit to his troops in October 1944.

In March 1945, he succeeded Feldmarschal Gerd von Rundstedt as supreme commander of the western front after the failure of the Ardennes offensive. Kesselring had little more than an undermanned and under armed 15th Army to stop the Allies at the river Rhine, an impossible task. On May 4, 1945, he signed the surrender of Heeresgruppe Süd and he was made a prisoner of war by the Americans on May 15th.

In 1947 he was subpoenaed by an English court martial in Venice. The public prosecutor demanded the death sentence for him as he would have had 335 Italian partisans executed. On March 23rd, 1944 partisans had launched a bomb attack on a German barracks on the Via Rasella in Rome. From Berlin, Hitler issued an order  subsequently passed on by Kesselring  that in revenge, 10 Italians were to be executed for each German killed. Therefore, on March 24, 335 Italians were executed in what was to become known as the Ardean Cave Massacre. On May 6, 1947, the English court in Venice sentenced him to death. In July 1947, the sentence was revised to life imprisonment and Kesselring was transferred to the Allied prison in Werl (west Phalia) In 1948, life imprisonment was revised to 20 years. He was released in 1952 for reasons of health. Kesselring was offered the chairmanship of Stahlhelm, Bund der Frontsoldaten (Union of front soldiers). He accepted the offer and remained chairman until his death. The organization still exists today. He also started writing his memoirs entitled "Soldat bis zum Letzten Tag" (soldier to the last day), published in 1953.
Albert Kesselring died on July 16, 1960 in Nauheim, Hessen.

Ardennes offensive
Battle of the Bulge, Von Rundstedt offensive or die Wacht am Rhein. Final large German offensive in the west from December 1944 through January 1945.
front
Largest Soviet ground formation. It was attached to a certain area which gave its name to the units involved. For instance the Voronezh front.
Gustav line
German defensive line in the south of Italy to prevent the advance of the Allies.
Heeresgruppe
The largest German ground formation and was directly subordinate to the OKH. Mainly consisting of a number of Armeen with few directly subordinate other units. A Heeresgruppe operated in a large area and could number several 100,000 men.
invasion
Armed incursion.
Luftwaffe
German air force.
offensive
Attack on a smaller or larger scale.
Reichskommissar
Title of amongst others Arthur Seyss-Inquart, the highest representative of the German authority during the occupation of The Netherlands.
resistance
Resistance against the enemy. Often also with armed resources. 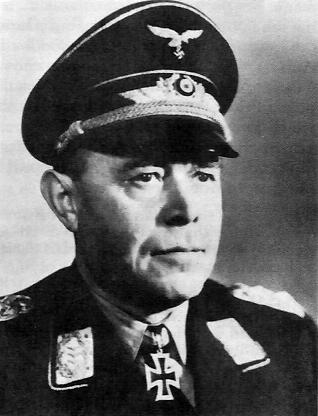 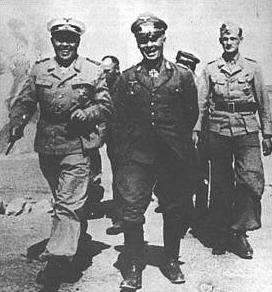 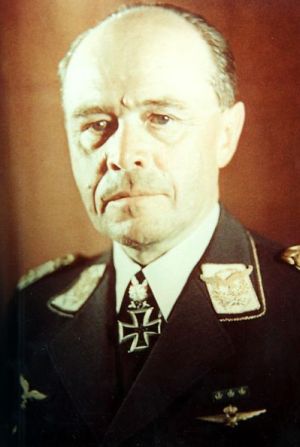 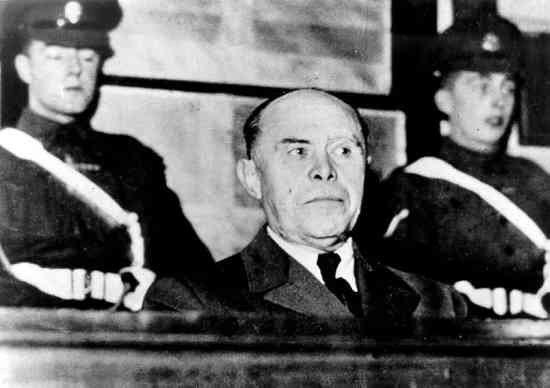 Kesselring at his trial in Venice (1947) Source: Deutsches Historisches Museum.