The Bandenkampfabzeichen was instituted by Adolf Hitler on January 30th 1944. It was meant to be a bravery and service award, specially for SS and Polizei members that were in action against Partisans.
During the years of occupation in most parts of Europe, there was a growing form of resistance against the German occupation. Towards the end of the Second World War, large groups of the resistance were combined into Partisan groups and committed many sabotage actions. These activitys became more and more coördinated, specially in countrys like Poland, Yugoslavia, France, Greece and the Soviet-Union. An ever growing amount of German forces, mainly SS and Polizei, were put into action to try and keep open the supply routes towards the front.
The overwhelming emptiness of the Soviet occupied territory meant a special threat. There the Partisans were able to unite themselves in huge groups, sometimes forming even whole divisions.

The amount of troops needed to fight against the Partisans, bounded German formations that could not be put into action on the front. This amount grew towards the end of the war. Around the beginning of 1944 it is estimated that a total of between 500.000 and 1.000.000 Partisans were in action against the Germans. In order to recognise the hardness of the battle, the Bandenkampfabzeichen was instituted and open to all soldiers regardless their rank, that were part of the struggle against the Partisans. Even members of Countrys that fought with the Germans could receive the award.

At the base of the award one can find a skull and crossed bones, surmounted by a sword, together with the five heads of the Hydra (A snakelike Greek Mythological creature). The sword bears a Swastika sun wheel and the total is surrounded by an oak leaves wrath.
The badge was manufactured in zinc and two main types can be found. There are solid ones and semi hollow ones. The semi hollow type can be found with a large or with a thin pin and with or without silhouetted snake heads. The badge was presented in a dark green box with white satin inlay. It was to be carried on the left upper pocket, just below the place of the EK I (Iron Cross 1st Class). 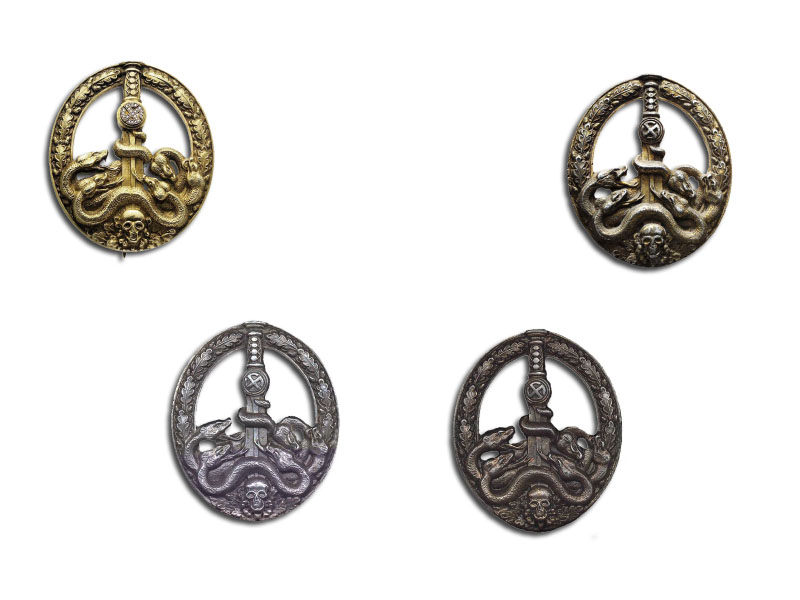