The Grand Cross can be obtained with swords (Vapaudenristin suurristi miekkojen kera (VR SR mk), military) of without (Vapaudenristin suurristi (VR SR), civilian). It is the highest grade of the Order of the Cross of Liberty, which was installed in 1939 and was derived from the "Freedomcross". The Grand Cross could be awarded to Heads of State and Field Marshalls or to high ranked political and military leaders. The Grand Master of the order also wore the Grand Cross.

The size of the Grand Cross is slightly larger then the other grades. Until 1941 the cross hung on a yellow ribbon with a red band on both sides. From 1941 the military version was awarded on a red ribbon with two white bands. This version also was awarded to those who already had received the decoration before 1941. The ribbon was to be worn over the right shoulder. On the left breast a star (with or without swords) was pinned.
The medal self was a white "Finnish" cross with on it a "Finnish" swastika. In the middle was a rose. Above the cross a laurel wrath was to be found. The military version has two arms in the laurel wrath, one with a sword (left) and the other with a sabre sword. The civilian version only wears the laurel wrath.
The five-armed breast star Bears in the centre a medallion with red border. On the red border are the words "ISÄNMAAN PUOLESTA" ("For the Fatherland"). Within the medallion is a white rose on the "Finnish" Swastika. 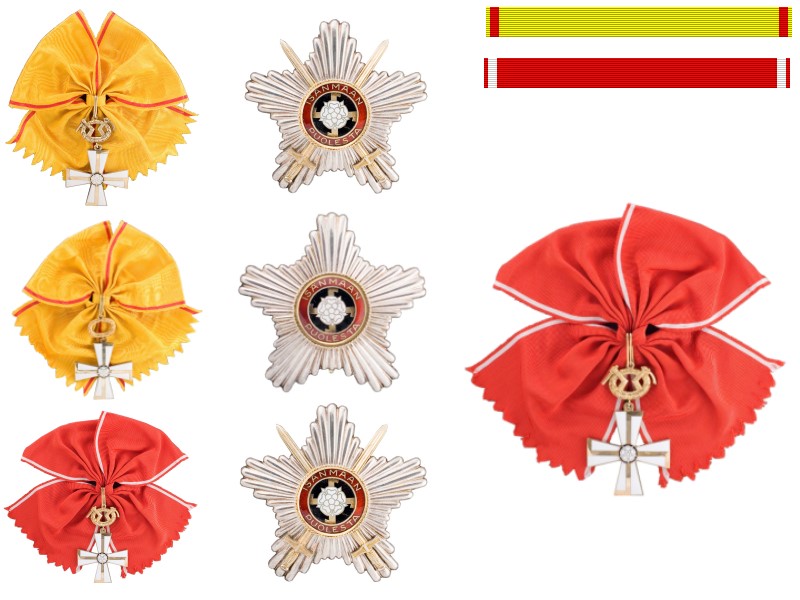