The Narvik Badge was instituted by Adolf Hitler on August 19th, 1940; the decree was published the Reichsgesetzblatt Nr. 154 of August 28th.
The badge was to be worn on the left upper arm. A smaller version in the form of a pin could be worn on civilian clothes. Eligible for the award were soldiers of the Navy, Army and Air Force who had participated in the landings at Narvik or in the battles of the Kampfgruppe Nord.
September 9th, 1940, the requirements were detailed further by the Generalkommando Gebirgskorps Norwegen (General Command Mountain Corps Norway). As to the participation in the battles, the period was set between April 9th, and June 9th, 1940 at 24:00, for battles on land or sea under the command of the Befehlshaber Gruppe Narvik (Commander Group Narvik) in the area borderd by Riksgränsen, the Oalge pass, Gratangsbotn, Norddalen or in the air over this area for the benefit of air attacks and supply, reconnaissance or relief flights.
The bagde was presented in a paper bag and awarded in the name of General der Gebirgstruppen Eduard Dietl (General of Mountain troops). The badge measures 3.6" by 1.6" on a textile background measuring 3.9" by 2.1".
A total of 8.527 Narvik badges have been awarded in two versions, Gold for the Navy and Silver for Army and Air Force. 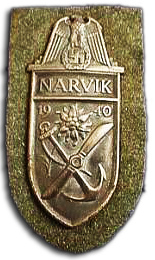