The Cholmshield was instituted on 1 July 1942, to award the defenders of the Cholm pocket. The shield was designed by Polizei Rottwachtmeister Schlimmer and after approval by Generalmajor Theodor Scherer, the design was send to Hitler as soon as the defenders were relieved. Hitler showed it to Professor Dr. Richard Klein from Munich and he made some small adjustments such as the size of the shield became somewhat smaller and the design of the eagle was slightly changed. After these changes the shield went into production.

Cholm (Kholm) was a small city on the River the Lovat in the Kalinin region of northern Russia. In this city were during the Russian winter offensive of 1941/1942, about 5500 Germans surrounded. These were mainly Army units but also some Police troops and some Navy personnel. All these troops were combined to Battle Group (Kampfgruppe) Scherer. The encirclement of the city was on 21-01-1942 a fact and this encirclement was not broken until 05-05-1942. Hitler ordered that this pocket must be defended to the last man, because it was an important strategic point and this point was also needed for the new German summer offensive of 1942. The defenders of the Cholm pocket withstood more than 100 massive Russian Infantry and 42 Tank assaults. The defenders held out against all odds with help of the supplies that were flown in by air. For these heroic defenders, Goebbels published later a propaganda book entitled: Kampfgruppe Scherer  105 Tage Eingeschlossen.

The shield was first stamped out of plate steel and later produced of zinc. The shield has a slightly concave shape with a hollow backside and a flat top with a pointed bottom. The centre design exists of a typical Wehrmacht eagle with foulded wings, that is clutching the Iron Cross in its claws. The eagle looks to the left, in the original design the eagle looked to the right but when wearing the shield, the eagle looked than to the back so this was changed into a left looking example. Underneath this image stands the word CHOLM and underneath that the year 1942. The shields measurements are: 38 to 39,5mm width and 65 to 65,5mm high. There are two different types of this shield namely an early and a late type. The early type is stamped out of plate steel and is magnetic. The late type is made out zinc and both types were finished with a silver wash. At the backside is a supporting plate mounted with 3 or 4 pins and between these two parts is a piece of cloth placed. The colour of this piece of cloth depends on, in which Army branch the recipient served. This could be Wehrmacht, Luftwaffe or Kriegsmarine. The piece of cloth is in the early type oval shaped and with the late type it has got the same shape as the shield. In both types is that piece of cloth significant larger than the shield, so that it could be sewed to the left sleeve of the uniform. The supporting plate with pins was covered with a piece of red brown coloured paper or a piece of cloth. This was to protect the uniform from the pins. It was for the recipient also possible to buy a (9mm) stickpin of this award. This stickpin could be worn on the civilian tunic.

This shield is approximately 5500 times awarded. The shield was awarded in name of Generalmajor Scherer and with the shield came a standard award document. The awarding was also noted in the Soldbuch. The shield was permanently worn on the left sleeve of the uniform and because of this there were multiple examples given to the recipient. It was also possible for the recipient to buy later new shields, this could in the official controlled LDO outlets. When the recipient owned multiple campaign shields, these could be worn underneath each other with 5mm space between them.

The Cholmschild was awarded to any member of the Wehrmacht or persons added to the Wehrmacht forces, who took part in the fightings over the surrounded Cholm area and who took honorably part in the defence of the area between January 21st and May 5th, 1942. Besides the Cholmshcild the awardees also received from the Reichsminister für Volksaufklärung und Propaganda, Dr. Goebbels the book "Kampfgruppe Scherer - 105 Tage eingeschlossen". 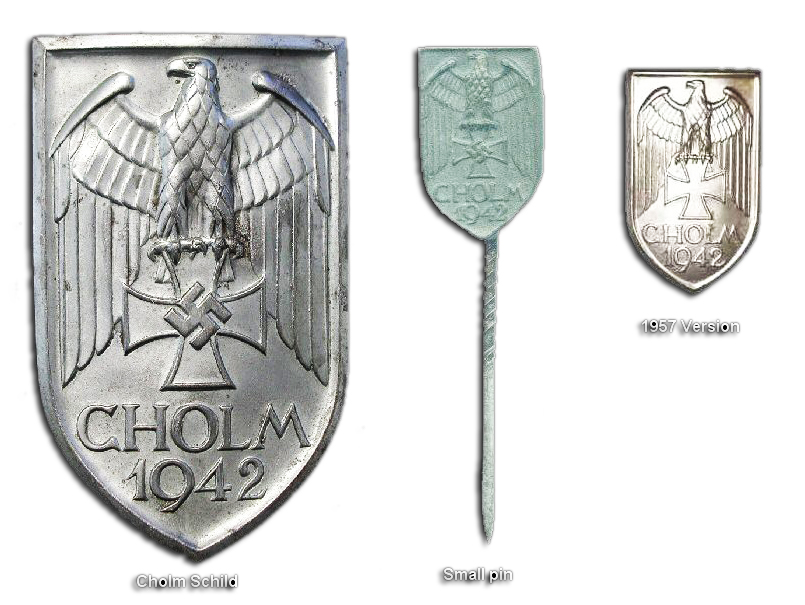