The German Hilfskreuzer, were auxiliary cruisers or in fact cargoships that were transformed or designed to stop, enter, capture or sink enemy cargoships with the help of weapons or guns. Because of their appearance as cargoship, they could come very close to their prey before revealing their true nature, before opening the attack.
This modern form of piracy was known long before the Second World War and was even allowed according to the laws of warfare, provided that the ships were recorded in the merchant registers as their true nature of use.

During the Second World War, Germany used 11 Hilfkreuzer, Atlantis, Coronel, Hansa, Komet, Kormoran, Michel, Orion, Pinguin, Stier, Thor and Widder. Right from the star of the war, nine of these ships were equipped with a floatplane (Arado Ar 196A-1 of Heinkel He 114B). They were provided with food, oil and ammunition by special ships or in ports of nations like Italy and Japan. Approximately 4600 naval men served on the ships during the war. Their contribution to the war efforts are not very certain, but clear is that they achieved all their objectives and even more.

To award the actions of the Hilfskreuzer, on April 24th, under the command of Großadmiral H.C. Raeder, the Kriegsabzeichen für Hilfskreuzer was introduced. The decoration could be awarded to all crews of the Hilfkreuzer, even posthumously. It was awarded after completing a successful long distance voyage by an auxiliary cruiser.

The design was made by Wilhelm Ernst Peekhaus and it was produced by different factories. Examples are known from Schwerin/Berlin, Friedrich Orth/Wien (f.o.), Rudolf Souval/Wien (R.S.), V. Wilhelm and Godet & Co./Berlin. Many examples are known without the markings of any factory, therefore it can be said that many other factories have produced the.

Used were the metals Alloy and Sinc. There are examples known in Silver, that were produced by a Japanese firm. The decoration varies in height between 56,6 and 58 mm and width between 44 and 45 mm. The weight varies between 27 and 37 gram. The rare Japanese version weighs more (48,7 gram).
The pin was made of Alloy and fastened with Alloy of Iron.
There are variations known that were embroidered on fabric.

The citation could vary in form, but was always stated in the same way. On top you can find the text "BEZITZZEUGNIS", followed beneath with "Im Namen des Oberbefehlshaber der Krigsmarine", what again was followed by "verleihe ich dem". Under this were typed the rank and name. The citation was completed with the words "das Kriegsabzeichen für Hilfskreuzer". At the end one can find name and date of the citation and the signature of the officer that gave the decoration. The size can vary from DIN A5 till 210 x 148 mm

The decoration was to be worn, like the U-boot Kriegsabzeichen, on the left side of the chest. To be worn on civil clothing there was a pin produced. These miniatures could vary in height between 9 mm and 16 mm. 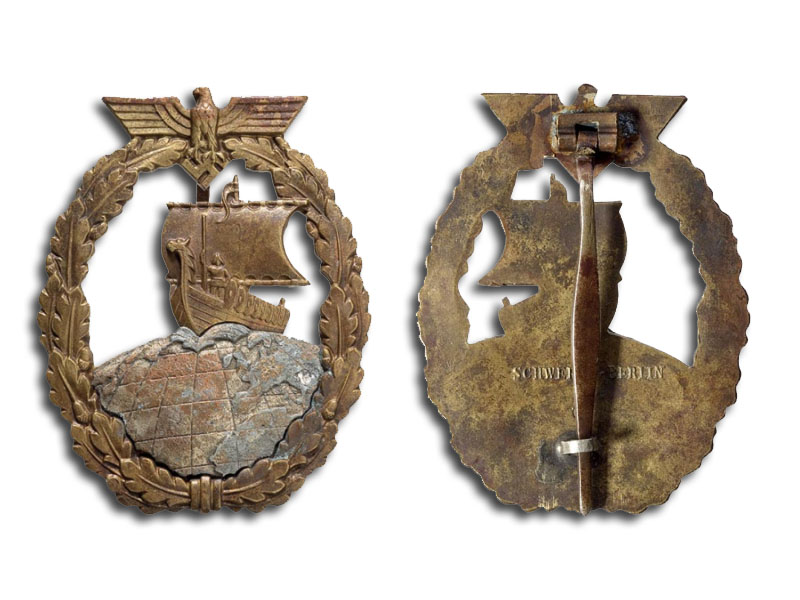