The "Ordo Militaris et Hospitalis Sancti Lazari Hierosolymitani" was a religious and military Order of Knights during the time of the Latin Kingdom of Jerusalem and must have exsisted sometimes around the year 1099. It was an Order that was related to the relief of leprosy. Many of the members were lepers who previous had been knights in other orders. When Acre fell in 1291, the Knights of Saint Lazarus fled from the Middle East to France and finally settled in Naples in 1311. In the following centuries the Order declined until in 1572, with help of the Pope, the Duke of Savoy became its Grand Master.
The "Ordine Cavalleresco e Religioso di san Maurizio" was established in 1434 by the Duke of Savoy, Amadeus VIII. He later became Antipope Felix V. The oder declined, but was re-established by Pope Pius V in 1572 and the Duke of Savoy was appointed its Grand Master.

In 1572, Pope Gregory XIII, merged both the "Ordo Militaris et Hospitalis Sancti Lazari Hierosolymitani" and the "Ordine Cavalleresco e Religioso di san Maurizio" into a new Order, the "Ordine dei Santi Maurizio e Lazzaro". The Order was in charge of the defense of the Holy Seel at Sea and to continue to assist the lepers. Again the Duke of Savoy was made its Grand Master.

With the unification of Italy between 1860 - 1871 as a Kingdom under the House of Savoy, the Order became an Italian State Order for civilian and military merit in five classes, Knight Grand Cross, Knight Grand Officer, Knight Commander, Knight Officer and Knight.
With the dissapearance of the Kingdom in 1946 and the establishment of the Republic, the Order was in line of importance, replaced by the "Ordine al merito della Repubblica Italiana". Although the Order was not officially recognized by the Italian State, in 1951 it was being permitted to wear the decoration on civilian and military clothing, although on the ribbons the crowns were to be replaced by five pointed stars. The House of Savoy in exile, continues to bestow the Order as a House Order for persons eminent in the public service, science, arts, letters, trade and charitable works. The Head of the House of Savoy remains the Grand Master. 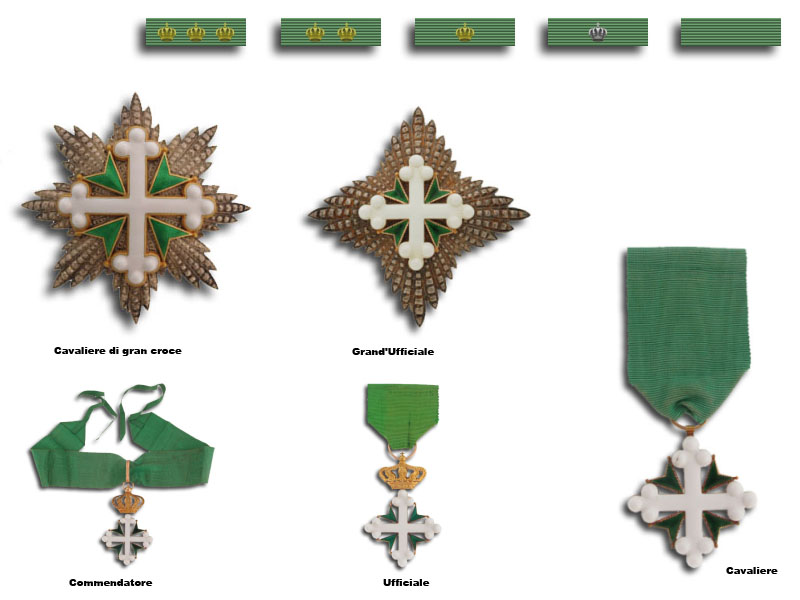