The Krzyz Kampanii Wrzesniowej of 1939 (Cross of September campaign of 1939) was instituted by Presidential Decree of Polish Government in exile in London on September 1st 1984, for the 45th- anniversary of the beginning World War II.
The veterans of the Polish Armed Forces, the Group of Border Forces, the veterans of Silesian and Warsaw uprisings, the soldiers of Civil Defense, the veterans of partisan movement and other defenders of Poland - participants in the defensive war in September- October of 1939 were awarded the cross of September campaign of 1939. Also were awarded the citizens of Poland and foreign citizens, who did not participate in the war, but who lent by their actions aid and support to the Polish army.

The cross is a Greek cross, prepared from silver-plated oxidized metal.
In the centre on the front side of cross is placed the image of the crowned eagle with the panel of Amazon in the claws. The lower part of the panel is covered by leafs with on it the inscription "WRZESIEN". Below this there can be found the date "1939". On the left arm the date: "1.IX" - the beginning of German aggression and World War II and on the right arm the date: "17.IX" the beginning of the " Soviet aggressions "(introduction of troops of the Red Army to the territory of the West Ukraine and West Belorussia). On the lower arm is the inscription "RP". The face side of cross is edged by anarrow border. The obverse is smooth.
The dimensions of the cross are 40 X of 40 mm, with a base of 13 mm. The width of arms is 11 mm and the border 0,7 mm.
The ribbon of the cross is 38 mm and white a longitudinal band (6,5 mm) of red color in the center with narrow (1,5 mm) strips of red color on both sides from the longitudinal strip. As a boundary there is on both sides a red strip (3 mm). 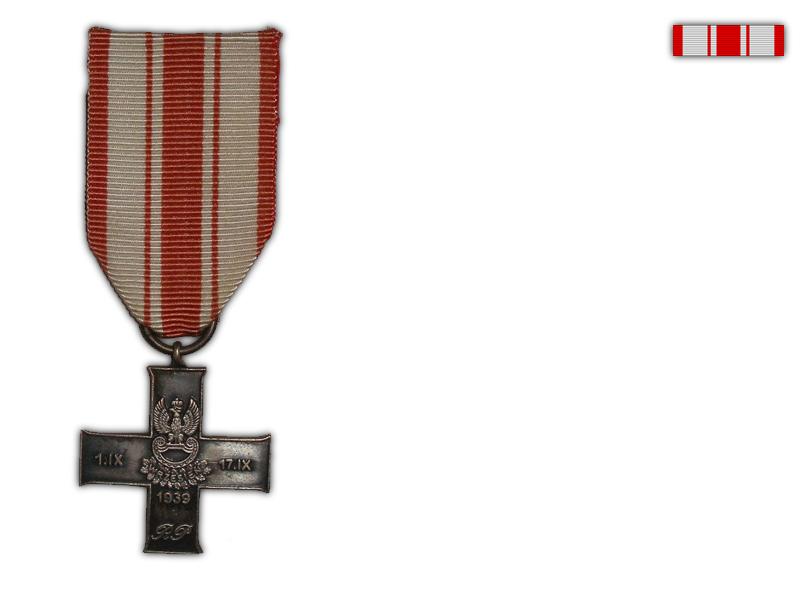