The Distinguished Flying Cross (DFC) was established on June 3rd, 1918, the birthday of King George V, and is awarded to Officers and Warrant officers for "an act or acts of valour and courage or devotion to duty performed whilst flying in active operations against the enemy". A straight silver bar is a further enhancement of the DFC, awarded for additional acts under the same terms as the cross.

The award has the shape of a silver cross and was designed by Edward Carter Preston. On the obverse aeroplane propellers are superimposed upon the vertical arms of the cross. Within a central winged roundel, encircled by a wreath of laurels and surmounted by a Imperial Crown, appear the letters RAF. In the central circle on the reverse the Royal Cyphers, GV, GVI, EIIR, appear above the date 1918. The year of issue is engraved on the lower arm of the award. The DFC is issued unnamed.
The ribbon is 1.25 inches wide, and consists of alternating violet and white stripes, each 0.125 inches wide, leaning at 45 degrees from the vertical. Until 1919, the stripes were horizontal.

From the entire period of the award from its inception in 1918 until 1939 when the award changed to the GVI type, only 1,217 GV DFC's were issued. 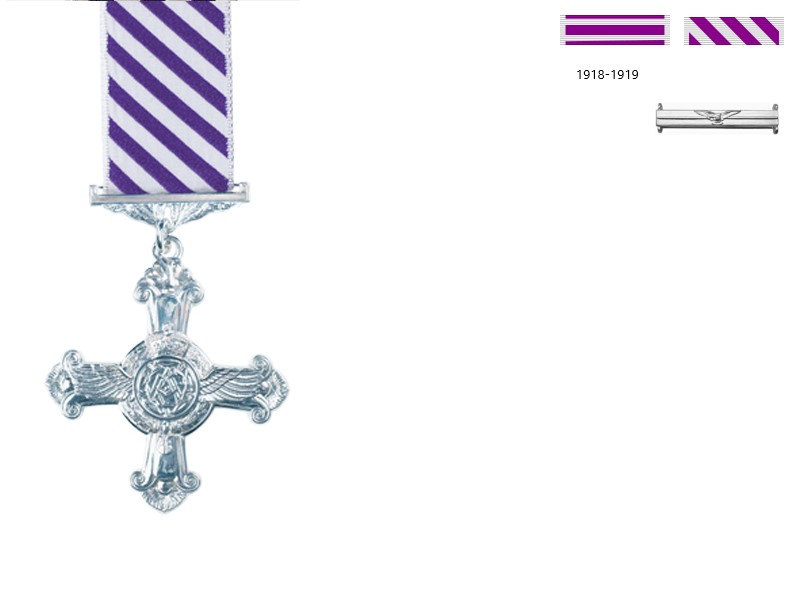