Arthur Ashworth enlisted in the RNZAF in September 1939 and transferred to the RAF in June 1940. He went trough his flying training program in New Zealand and subsequently flew with No. 75 Squadron in the Middle East. Besides flying bombers he was one of the few airmen who also flew fighters and participated in total 110 operational sorties.

After the war he remained in the RAF and became an instructor at Middle East Training School at Amman (Transjordan, now Jordan) and commanded the Iraq and Persia communications Flight at Habbaniya (Iraq). In Farnborough, he was posted to the Empire Test Pilot School and flew Havilland Vampire and Gloster Meteor jets. During his time at Farnborough, he was also posted to the Instrument and Photographic Flight at the Royal Aircraft Establishment. Ashworth also participated in auto-pilot testing.

Following his return from Australia in 1951, he did more auto-pilot testing plus firing some of the early ejector seats and low level/high speed/night photography from a Meteor. He finished his tour at the end of 1951 and was awarded an AFC for his time at Farnborough.

Afterwards, Ashworth became a senior staff officer with No. 1 Bomer Group and, following a very short course on the Canberra Operational Training Unit, h took charge of No. 139 (Jamaica) Squadron, based at Hemswell. He left the Squadron for a posting at the Air Ministry in October 1955, earning a Bar to his AFC for his work with the squadron.

Ashworth retired from the RAF due to his increasing blindness.

Citation:
"One night in June, 1941, this officer was the pilot of an aircraft which carried out an attack on the Scharnhorst at Brest. Although the target was obscured, Pilot Officer Ashworfh flew over trie area for a considerable, time finally dropping flares immediately north and south of the target, which enabled him to see and attack"his objective. He also aimed one bomb at an unidentified vessel of 10,000 tons which was observed to be entering the docks. This operation necessitated Pilot Officer Ash worth remaining over the area for one and a quarter hours, making eight surveying runs, at times at an extremely low altitude and in the face of intense anti-aircraft fire. Since February, 1941, this officer has participated in twenty operational missions. He has displayed outstanding skill, courage and infinite care in his efforts to bomb his objectives accurately."

Citation:
"Throughout the numerous sorties which Squadron Leader Ashworth as completed, many of them in the Middle East, this, officer has displayed utter fearlessness and a magnificent .determination to reach and bomb his allotted target despite all odds. His great skill and efficiency as a captain of aircraft have been an excellent example and stimulus to the entire squadron."

Second DFC awarded as a bar for on on he ribbon of the first DFC. 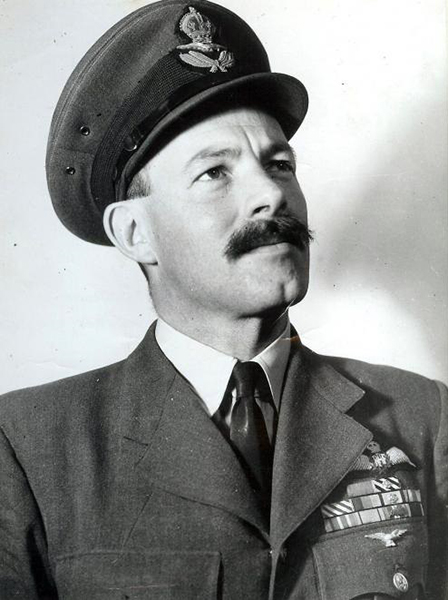