The Defence Medal was awarded for service in the forces in non-operational areas subjected to air attack or closey threatened for at least three years service in Great Britain until 8th May 1945 or one year in territories overseas until 2 September 1945. In the case of mine and bomb disposal units the time qualification was three months and Canadians serving for one year in Newfoundland were eligible and persons serving for six months in Hong Kong were also eligible. Service in West Africa, Palestine and India, other than operational air crew, qualified also for this award. Those awarded the George Cross or the George Medal for civil defence received this award and the Home Guard also qualified for this award.

Owing to the terms of reference it was not unusual to find a person with this award who had never heard a shot fired, but a person with only the Defence Medal, for example, whilst serving in the rescue services in London earned also this award and only the man who wears this award knows why it was earned.

The award has the coinage head of King George VI on the obverse. The reverse shows the Royal Crown resting above a small oak tree and flanked by two heraldic lions. The dates 1939 and 1945 appear in the top left and right respectively on the reverse, whilst beneath are the words THE DEFENCE MEDAL. The Medal is made of a Cupro-Nickel combination. The Canadian versions however, were made of ".800 fine" silver. 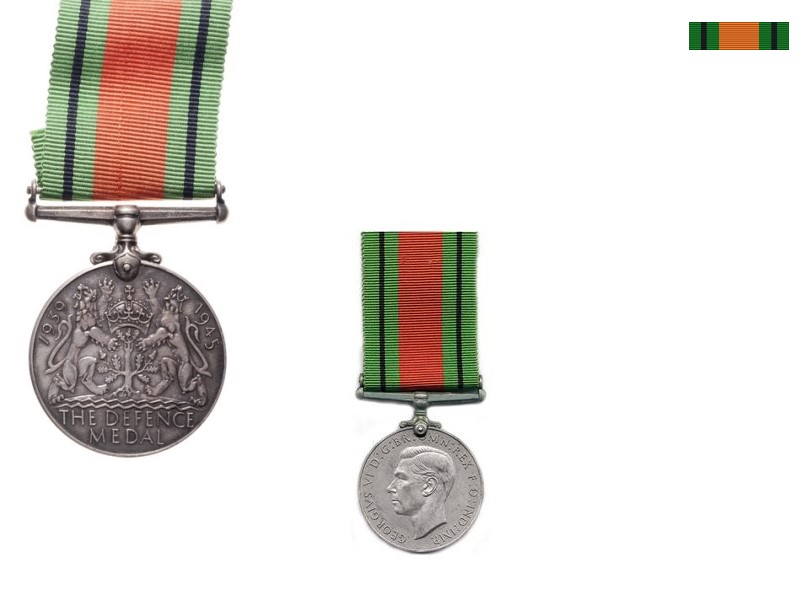