The George Cross -or GC- was instituted June 24th, 1941, by King George VI. This decision was actuated by an air raid on London in 1940 during which the Royal Palace was hit. After this incident, King George became emotionally more involved with his people and he realised what they had to go through during the raids, admiring even more their hardships and heroism. As a result, the George Cross and George Medal were largely designed by him.
The George Cross is the second highest British decoration and is awarded for "acts of the greatest heroism and bravery in circumstances of extreme danger". It was initially awarded to all citizens of the Commonwealth and was later extended to military personnel for actions that did not usually merit a military decoration. Recipients are entitled to add the letters GC after their names. Bars will be awarded for subsequent acts of bravery and the decoration can be awarded posthumously.
The GC is the successor to the Medal of the Order of the British Empire for Gallantry and its recipients were obliged to return it to the Central Chancellery of the Orders of Knighthood to have it replaced by a George Cross. In 1971, recipients of the Albert Medal could also exchange this for a George Cross.

The badge is made of silver. On the front is an image of St. George fighting the dragon surrounded by the inscription 'For Gallantry', on the reverse are engraved the name of the recipient and the date of the award. Each arm of the cross bears the cypher of the reigning Monarch, during the war GRI or GRVI, after the war EIIR. The cross hangs from a silver bar adorned with laurel leaves by a silver ring. The ribbon is 1.75" (38 mm) wide and coloured blue with a miniature GC in its centre.

The George Cross was conferred upon the Island of Malta for the display of bravery of its citizens during the war. Four times a George Cross was conferred upon a woman, three of which posthumously. Three women were awarded the GC for resistance activities in occupied territories during WW 2. One of them was Noor Inayat Khan. This Russian born woman was dropped over France July 16th, 1943, to assist the French resistance movement in their activities. Some three months later, she was betrayed and taken prisoner by the Gestapo (German Secret Police). Despite numerous interrogations she refused to cooperate and divulge information, consequently she was sent to a prison camp in Germany. Even there she refused to cooperate and she was then sent to Dachau concentration camp September 12th, 1944, where she was executed the next day.
The Royal Warrant of May 8th, 1941, reads as follows:

ROYAL WARRANT
GEORGE THE SIXTH, by the Grace of God, of Great Britain, Ireland and the British Dominions beyond the Seas King, Defender of the Faith, Emperor of India to all to whom these Presents shall come
GREETINGS
Whereas by a Warrant under Our Sign Manual dated the twenty-fourth of September one thousand nine hundred and forty, We, having taken into Our Royal consideration the many acts of heroism performed both by male and by female persons, especially during the present war and wishing to honour those who perform such deeds, did institute and create a new Decoration to be styled and designated "The George Cross," which we desired should be highly prized and eagerly sought after:
And whereas We deem it expedient that the seventh clause of Our aforesaid Warrant should be amended:
Now therefore we do hereby declare that the rules and ordinances contained in Our said Warrant shall be abrogated, cancelled and annulled, and in substitution thereof We, by these Presents for Us, Our Heirs and Successors are graciously pleased to make, ordain and establish the following rules and ordinances for the governance of the same which shall from henceforth be inviolably observed and kept.
Firstly: It is ordained that the Decoration shall be designated and styled "The George Cross."
Secondly: It is ordained that the Decoration shall consist of a plain cross with four equal limbs, the cross having in the centre a circular medallion bearing a design showing St. George and the Dragon, that the inscription "For Gallantry" shall appear round this medallion, and in the angle of each limb of the cross the Royal cypher "G. VI" forming a circle concentric with the medallion, that the reverse of the Cross shall be plain and bear the name of the recipient and the date of the award, that the Cross shall be suspended by a ring from a bar adorned with laurel leaves, and that the whole shall be in silver.
Thirdly: It is ordained that the persons eligible for the Decoration of the Cross shall be
Our faithfull subjects and persons under Our protection in civil life, male and female; persons of any rank in the Naval, Military or Air Forces of Our United Kingdom or persons within and members of the Naval, Military or Air Forces of Our Dominions or Government whereof. (abridged).
The Cross is intended primarily for civilians and award in Our military services is to be confined to actions for which purely military Honours are not normally granted.
Fourthly: (in summary) ordains the way in which recommendations for the award shall be made
Fifthly: It is ordained that the Cross shall be awarded only for acts of the greatest heroism or of the most conspicuous courage in circumstances of extreme danger, and that the Cross may be awarded posthumously.
Sixthly: It is ordained that every recommendation for the award of the Cross shall be submitted with such description and conclusive proof as the circumstances of the case will allow, and attestation of the act as the Minister or ministers concerned may think requisite.
Seventhly: (in summary) regulates the way the decoration is to be worn.
Eightly: It is ordained that the award of the George Cross shall entitle the recipient on all occasions when the use of such letters is customary, to have placed after his or her names, the letters: "G.C."
Ninthly: It is ordained that an action which is worthy of recognition by the award of the Cross, but is performed by one upon whom the Decoration has been conferred, may be recorded by the award of a Bar to be attached to the ribbon by which the Cross is suspended, that for each additional award an additional Bar shall be added, and that for each Bar awarded a replica in silver of the Cross in miniature, in addition to the emblem already worn, shall be added to the ribbon when worn alone.
Tenthly: (in summary) ordains that names of recipients of the Cross and/or Bars be published in the London Gazette and a register of such names be kept at the Central Chancery of the Orders of Knighthood.
Eleventhly: (in summary) ordains the exchange of the Medal of the Order of the British Empire for Gallantry for the George Cross.
Twelfthly: (in summary) institution of the Miniature Cross, to be worn on certain occasions.
Thirteenthly: ordains when and under what circumstances a George Cross will be withdrawn and by whom.
Lastly: (in summary) the Monarch, his Heirs and Successors claim the right to alter or amend these rules at any time

Given at Our Court at St. James, the eight of May, one thousand nine hundred and forty-one, in the fourth year of Our Reign,

By His Majesty's Command 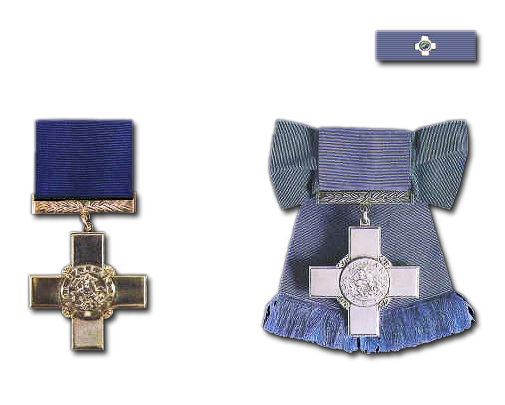