For sustained gallantry, enterprise and devotion to duty during enemy air raids.
A pair of semi-detached houses at Bridlington was totally demolished in a recent air raid. One woman was trapped alive. Alderson tunnelled under unsafe wreckage and rescued the trapped person, without further injury to her.
Some days later, two five-story buildings were totally demolished and debris penetrated into a cellar in which eleven persons were trapped. Six persons in one cellar, which had completely given way, were buried under debris. Alderson partly effected entrance to the cellar by tunnelling 13 to 14 feet under the main heap of wreckage and for three and a half hours, he worked unceasingly in an exceedingly cramped condition. Although considerably bruised he succeeded in releasing all the trapped persons without further injury to themselves.
The wreckage was unsafe and further falls were anticipated; coal gas leaks were of a serious nature and there was danger of flooding from fractured water pipes. Despite these dangers and enemy aircraft overhead, the rescue work was continued.
On a third occasion some four-story buildings were totally demolished. Five persons were trapped in a cellar. Alderson led the rescue work in excavating a tunnel from the pavement through the foundations to the cellar; he also personally tunnelled under the wreckage many feet into the cellar and rescued alive two persons (one of whom subsequently died) from under a massive refrigerator, which was in danger of further collapse as debris was removed.
A wall, three storeys high, which swayed in the gusty wind, was directly over the position where the rescue party was working. This was likely to collapse at any moment. Alderson worked almost continuously under the wreckage for five hours, during which time further air warnings were received and enemy aircraft heard overhead.
By his courage and devotion to duty without the slightest regard for his own safety, he set a fine example to the members of his Rescue Party, and their team work is of the highest praise. 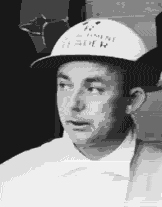