The War Medal 1939-1945 was established on August 16th 1945 and was awarded to all personnel of the armed forces of the British Commonwealth (excluding the Home Guard) and Merchant Navies for having served at least 28 days, operational or non-operational, between September 3rd 1939 and September 2nd 1945. For members of the Merchant Navy the 28 days had to be served at sea.
The medal was granted in addition to the other campaign stars and the Defence Medal. A few categories of civilians, such as war correspondents and civil air transport crews also qualified.
A single oak leaf emblem is worn to signify a "Mention-in-Despatches" and the silver oak leaf signifying a "Kings Commendation for Brave Conduct" is worn on the medal. There are no bars or clasps other than these emblems.
The circular medal is made of cupro-nickel, except the Canadian issue, which is silver, It is 1.42 inches in diameter. The obverse shows the crowned coinage effigy of King George VI, facing left, and the legend GEORGIVS VI D : BR : OMN : REX ET INDIAE IMP :. The reverse of the medal shows a lion standing on the body of a dragon. This dragon is double-headed, one of an eagle and one of a dragon to signify the principal occidental and oriental enemies. At the top are the dates 1939/1945.
The ribbon is 1.25 inches wide and red, white and blue with a narrow red stripe in the centre with a narrow white stripe on either side, broad red stripes at either edge with two intervening stripes of blue.
The medal was issued unnamed, except those awarded to personnel of the Canadian Merchant Navy and RCMP (Royal Canadian Mounted Police), and the Australian and South-African issues, which were named on the rim.
A total of 700,000 awards were issued, including 4,450 to the Canadian Merchant Navy. 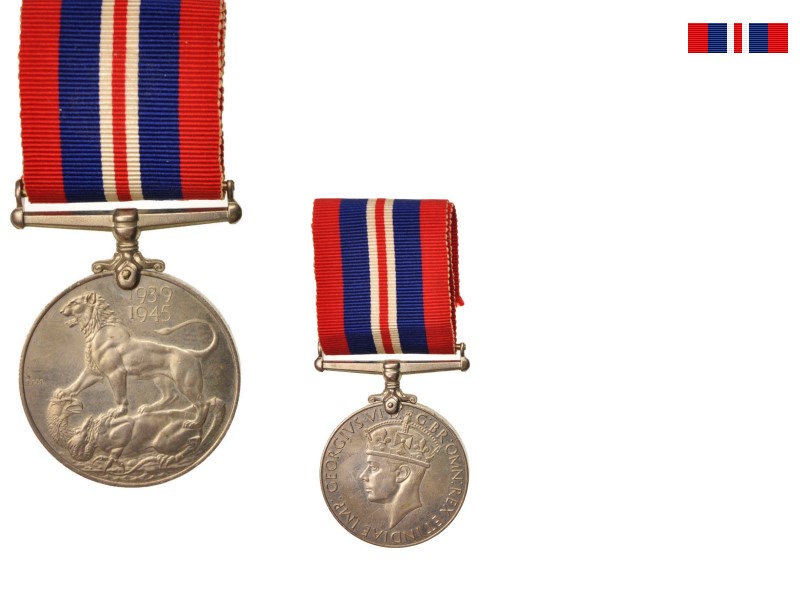