The Atlantic Star, instituted to commemorate the Battle of the Atlantic, was awarded to crews of the Royal Navy and the Merchant Navy for operational service at sea for at least 6 months in the Atlantic, the home waters or on the Russian convoys and to air crews for at least 2 months of operational service in these areas between September 3rd, 1939 and May 8th, 1945 or September 2nd, 1945 for operational service in the Pacific.
The Atlantic Star could not be awarded unless the 1939-1945 Star had been earned for 180 days of operational service or for 2 months of service in the air and therefore, the total requirement for the Atlantic Star is 12 months at sea or 4 months in the air.
Though this award was normally awarded to personnel of the Royal Navy and the Merchant Navy, personnel of the Army and Royal Air Force could also qualify for the award. For example, soldiers were frequently posted as gunners aboard armed merchant ships but to qualify for the award, an individual had to serve at sea for the same length of time and in the same areas as the service in which he served.
Those who also qualified for the France & Germany Star and/or the Aircrew Europe Star could wear a silver rosette on the ribbon of whichever of the three Stars was earned first.
The medal is a six-pointed star with the Royal Cipher GRI VI in its centre surmounted by a crown above the inscription THE ATLANTIC STAR. The reverse is plain and blank and the award is issued unnamed.
The ribbon is 1.25 inches wide with three stripes of equal width of dark blue, white and green representing the colours of the Atlantic Ocean. 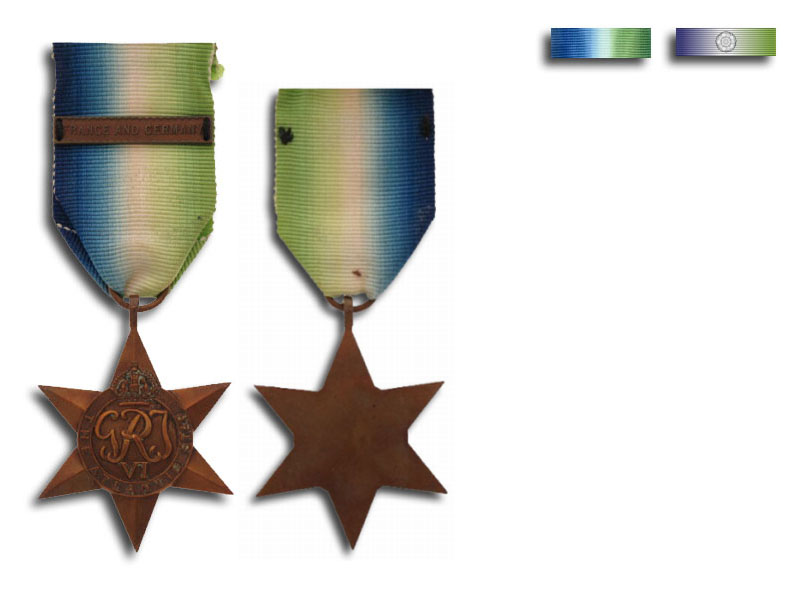