The Distinguished Service Medal was instituted on October 14th, 1914 and was awarded to Petty Officers and men, NCO's of the Royal Marines, the Army and Air Force and all other personnel of equal rank serving with the fleet, who "show themselves to the fore in action, and set an example of bravery and resource under fire, but without performing acts of such pre-eminent bravery as would render them eligible to receive the Conspicuous Gallantry Medal". A silver-coloured bar is awarded for additional acts of bravery.
The silver-coloured award has the shape of a circular medal, 1.42 inches in diameter. The obverse shows a crowned effigy of :

The reverse shows the legend FOR / DISTINGUISHED / SERVICE in three lines, encircled by a laurel wreath and surmounted by an Imperial Crown. The medal is issued with the inscription of the service number, rank, initials, surname and unit of the recipient.
The ribbon is 1.25 inches wide and consists of three vertical stripes of equal width: dark blue, white and dark blue, with a thin dark blue stripe down the centre of the white.

Total issued to Canadians : 116 plus 2 bars, 114 + 2 bars during the Second World War and two awards during the Korea War. 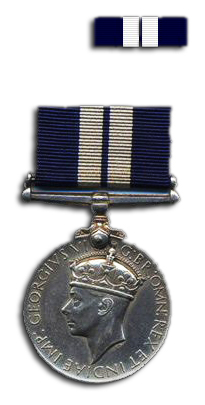