The Oorlogsherinneringskruis (War Commemorative Cross or War Cross) was instituted by Royal Decree Nr. 6 on March 16th 1944. The decoration was intended for military in Service of the Kingdom of the Netherlands, Dutch People or Dutch subordinates that served on board of Dutch Merchant or Fishery ships in Dutch or Allied service and Dutch Citizens or Dutch subordinates that were part of the crew of an airplane from the Dutch civilian Air Services in Dutch or Allied service. To apply for the decoration one had to be serving for six months in service since May 10th 1940 and had to have shown good service and behaviour.

By Royal Decree on June 10th 1947, the design was revised and given her definitive shape. The basic design was kept the same, a bronze cross with four arms, measuring 40 mm. On the front in an oval is the portrait of the Dutch Queen Hr. Ms. Queen Wilhelmina, surrounded with a circle containing the text "VOOR KRIJGSVERRICHTINGEN". Around this one can find an oak leaved wrath. Every arm of the cross contains the letter "W".
The reverse is plain and contains an oval with the text "KON.-BEGEER / VOORSCHOTEN / F.S.INV.", the factorys mark (F.S. stands for the designer Frans Smits).

With a Royal Decree on January 6th 1948, the entire decoration was revised. All the original bars were deleted and twelve new ones were created, five for Common and seven for Special Service.

The bars are made of bronze and measure 35 mm wide and 6 mm high. It was only allowed to wear one bar for Common Service, but more bars for Special Service could be worn.

The ribbon is 27 mm wide and most orange. On both sides one can find a 7 mm wide green band. The ribbon can be worn in the traditional military way as a rosette or just hanging on a single ribbon. Het lint heeft een breedte van 27 mm en is overwegend oranje, met aan beide zijkanten een groene, 7 mm brede band.
On the Ribbon Bar, the received bars were pictured by eight-pointed stars. When one or two stars are worn, the bar measures 27 mm, but when more stars are worn, a 37 mm wide bar is used. On one bas only four stars are allowed to be worn. 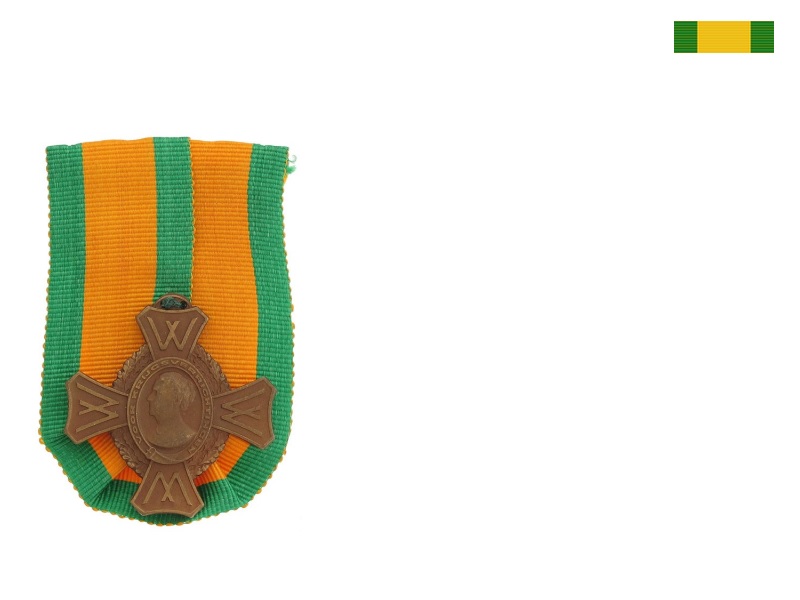