At The outbreak of World War II Edward Rohan Amerasekera joined the Ceylon Defence Force but was forced out by his sister and other family members. He then, secretly applied to join the Royal Air Force, was selected and left for England with the first batch of RAF Recruits from Ceylon in June 1941 on the S.S. Exeter. Reaching England on September 28, 1941, he enlisted at Euston at the Central Recruitment Centre.

Rohan Amerasekera died on March 20, 1974 at the age of 57. He was accorded a funeral with full military honours by the Government of Sri Lanka. His ceremonial sword and the miniature medals are on display at the Sri Lanka Air Force Museum.

Sometimes his name is written as Ekanayake Edward Rohan Amerasekera.

Citation:
"This officer has displayed a high degree of courage and determination in navigating his aircraft to the target and back, often under great difficulties. In November 1943 whilst on a flight to a distant target, the oxygen supply failed early in the sortie. P/O. Amerasekera, though suffering from lack of oxygen and extreme cold continued his duties and the mission was successfully completed. This officer has proved himself to be a navigator of outstanding ability."

Decorated mainly for dedication and bravery shown on November 11, 1943 on his mission to Cannes.

Citation:
"This officer has completed his second tour of operational duty. In December 1944, whilst on route to Essen, his aircraft was engaged by searchlights and heavy anti-aircraft fire was encountered causing severe damage to the aircraft. Despite the fact that shell splinters penetrated his compartment, F/O Amerasekera took evasive action and completed his allotted task. His other targets have included the Ruhr Valley, Chemnitz and Hanover. On all occasions, F/O Amerasekera has set a fine example by his tenacity and devotion to duty."

With France and Germany bar 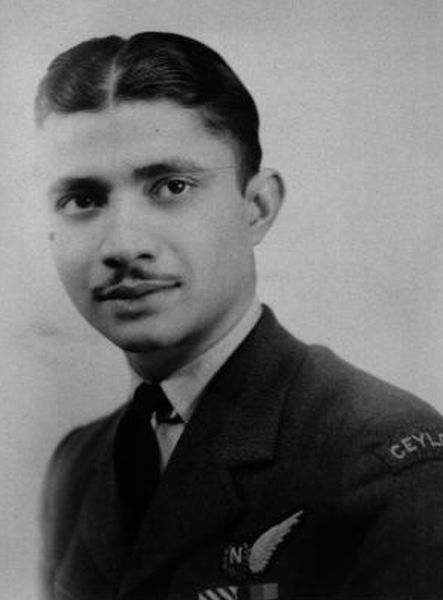