Tom Anderson lived in Welsford, New Brunswick. He was a former truck driver and clerk, ex-RCA, who enlisted in Moncton in June 1941. Trained at No.3 ITS (graduated 21 November 1941), No.17 EFTS (graduated 2 January 1942) and No.8 SFTS (graduated 24 April 1942). His DFC was sent by registered mail 28 June 1949.
After the war he was a Supervisor with Shell Oil for twenty five years in Montreal before retiring to Hampton in 1975.

Citation:
"As Captain of aircraft, this officer has shown great courage, determination and devotion to duty with an overwhelming desire to press home the attack. His ability as a leader has been outstanding and has been a great contribution to the operational efficiency of the unit. He has successfully attacked many major targets and has shown a complete disregard for opposition. His obvious ability, keenness and desire to serve have been an inspiration to all." 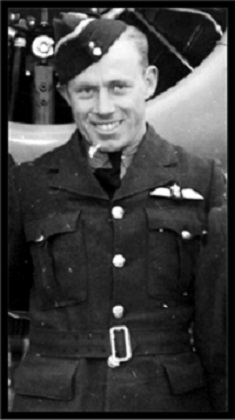