The Military Medal was established during the First World War by King George V on March 25th, 1916, a year and a half after Britain had declared war on Germany. Its inception was intended to meet the enormous demand for medals during the First World War. The medal was initially awarded to Warrant Officers, Non-Commissioned Officers and men of the army, including the Royal Flying Corps and Royal Naval Division, for individual or associated acts of bravery which were insufficient to merit the Distinguished Conduct Medal.
A bar could be awarded for subsequent acts of bravery.
The Military Medal, which had to be recommended by a Commander-in Chief in the field, was not restricted to British or Commonwealth subjects, but foreign subjects could be awarded as well. By a warrant dated June 21st, 1916, women also became eligible for the medal for devotion to duty under fire. Conferment of the medal was announced in the London Gazette and recipients earned the right to add the letters MM to their names.
The silver medal is round with a diameter of 1,4"; the obverse depicts the head of the reigning monarch; on the reverse, the text: "For Bravery in the Field" is engraved within a wreath of laurels.
The ribbon is dark blue, 1.25 inches wide, with a narrow vertical stripe of white, flanked by two red and those flanked by two white stripes; all stripes being 0.125 inches wide.
As many as 115,600 Military Medals were awarded during the First World War, along with 5,796 first bars, 180 second bars and 1 third bar. A further 15, 000 Military Medals were awarded during the Second World War. 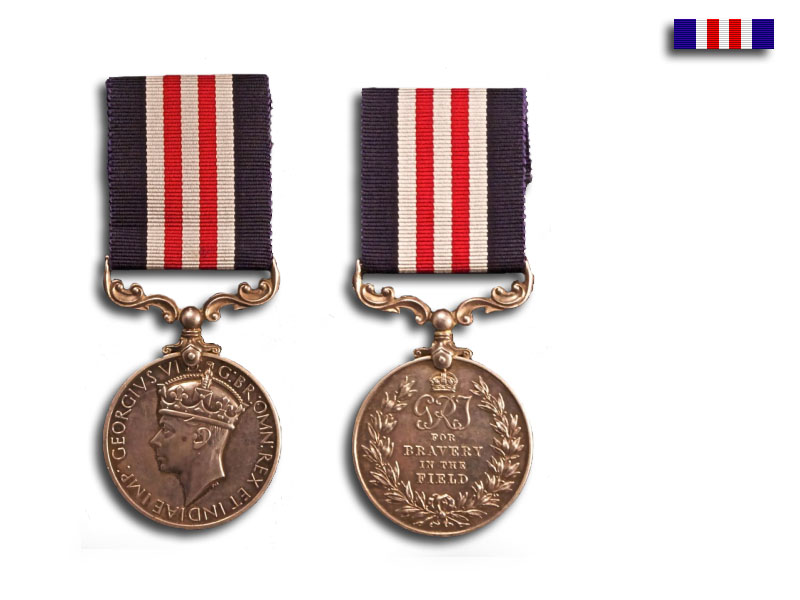