Recommendation:
Sergeant Aris of 3 Canadian Division Troops Company, Royal Canadian Army Service Corps, landed at Bernières-sur-Mer on D Day, 6 June 1944 at 1400 hours in charge of ammunition for the assault beaching. Disregarding the heavy sniping that was taking place he immediately organized his men and supervised the off-loading of the Landing Crafts Tank and establishment of the ammunition dump which due to his efforts was carried out efficiently and without casualty. During the night 6/7 June 1944 the beach and ammunition dump was heavily bombed, starting many fires, but the off loading continued in spite of the illumination and being under observation to snipers. Throughout this trying period, through his coolness, determination and devotion to duty, Sergeant Aris was an inspiration to his men and successfully controlled a difficult situation that otherwise might have been chaotic. Realizing the danger from the air by the illumination from burning ammunition to all troops and vital equipment on the beach, he organized a party of Pioneer troops and attacked the fires which were eventually extinguished. Again on 17 June 1944 at Thaon, France, while operating a supply point which came under heavy enemy shell fire, Sergeant Aris through his initiative and organizing ability moved the supply point to a place of safety without loss to valuable supplies or casualties to personnel. On 1 February 1945 Sergeant Bell was selected to be attached to 7 Canadian Infantry Brigade Company, Royal Canadian Army Service Corps for special petrol duties which involved forward dumps from the period of first entering Germany, the crossing of the River Rhine to the final phase of the campaign. During this period he was called upon to work many long and tedious hours to keep the division maintained and in many cases was exposed in positions of danger and enemy shell fire. Throughout the campaign in Northwest Europe Sergeant Aris has shown great determination to accomplish in spite of all difficulties any task he has been given and has shown devotion to duty which has been inspiring to those with whom he worked. 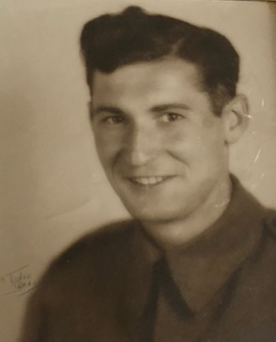