Citation:
"One night in April 1942, Flight Sergeant Alexander was observer of an aircraft detailed to attack Kiel. The attack was completely successful but on the return flight the aircraft was engaged by an enemy fighter. Damage was caused to the port airscrew and the hydraulic system, and the rear turret was so severely damaged that the gunner was unable to open its doors. Flight Sergeant Alexander, although slightly wounded in the arm, forced the turret doors with an axe and helped the rear gunner out. Although nearly all the instruments were unserviceable, Flight Sergeant Alexander's skilful navigation was mainly responsible for the safe return of the aircraft and crew. The courage and high sense of duty displayed by this airman has been an inspiration to the other members of the crew."

Citation:
"This officer has carried out a total of 51 sorties against heavily defended targets in Germany and enemy occupied territories. He has completed 35 sorties since the award of the Distinguished Flying Medal, eighteen of these being with this squadron on Pathfinder Force duties.

Flight Lieutenant Alexander has proved himself to be an outstanding navigator, both in the air and on the ground, his untiring efforts in helping new arrivals being worthy of the highest commendation.

The efficiency and high standard of devotion to duty he has displayed in accurately navigating his aircraft to the most difficult targets make him very worthy of the award of the Distinguished Flying Cross."

Initially he was recommended for a DSO. 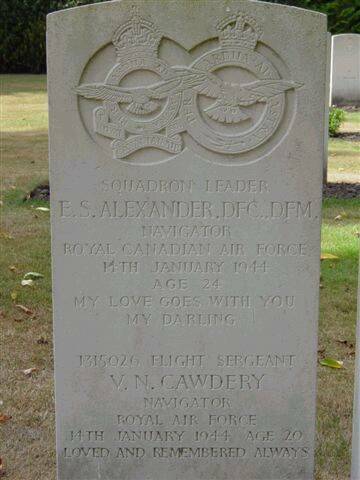