Max Aitken was the son of Lord Beaverbrook, the newspaper magnate and wartime Minister of Aircraft Production. He was educated at Westminster School and Pembroke College, Cambridge. He joined his father's organisation, was a keen flyer and he spent some time in the thirties flying throughout Europe and the USA, breaking several transport records and owning his own airplane, an Aeronca.
He joined no. 601 'City of London' Squadron, Royal Auxiliary Air Force in 1935. On outbreak of war he was mobilized at Hendon, seeing action on November 27th, 1939, a strafing attack on the seaplane base at Borkum.
He used his father's influence to get 601 Squadron early re-equipped with Hurricanes. In June 1940 he became commanding officer of the squadron. In February 1941, moved up the ranks, he took command of the new No. 68 Squadron, a Blenheim-equipped night fighter unit.
Early 1943 he was posted to HQ, Eastern Mediterranean to the Fighter Tactics Branch. Late 1944 he returned to the UK to command the Coastal Command Mosquito Strike Wing at Banff, operating over the Norwegian coast.
At the end of the war his victory list was 14 enemy aircraft shot down and 1 probable.
Max Aitken was released from the RAF early 1946 and became general manager of the Sunday Express and took command of No. 601 Squadron in the RAuxAF. He gave up this post in 1948 due to pressure of work, as he had also become a Conservative MP in 1945. He gave up his seat in 1950 and in 1964 succeeded his father as Lord Beaverbrook, but disclaimed the title the same year. He was knighted the following year, becoming Chairman of Beaverbrook Newspapers in 1968 and president in 1977.
In the 1960's he became an enthusiastic power boat racer and organised a competition for the boats in the Cowes-Torquay Race in which he participated.
He was married three times, was the 2nd Baron Beaverbrook and also Chancellor of the University of New Brunswick.

Citation:
"In May, 1940, whilst leading a section of aircraft on patrol over Brussels, this officer attacked one of twelve Heinkel 111's which was finally seen to be losing height with one of its wings on fire with black smoke pouring from the other. The next day when leading his section on another patrol, a large number of Heinkel 111 and Junkers 87 aircraft, escorted by Messerschmitt 110's, were sighted. Squadron Leader Aitken attacked and succeeded in destroying one Heinkel and one Junkers aircraft. During a night in June, 1940, in difficult circumstances, he destroyed yet another enemy aircraft. He has displayed great dash and gallantry."

Citation:
"A brilliant pilot and a gallant leader, this officer has set a most inspiring example. By his exceptional skill and unswerving devotion to duty, he has contributed largely to the high standard of operational efficiency of his squadron, and to the successes it has achieved. One night in July, 1942, the squadron destroyed 5 hostile aircraft, 2 of which were destroyed by Wing Commander Aitken himself. His total victories number 12." 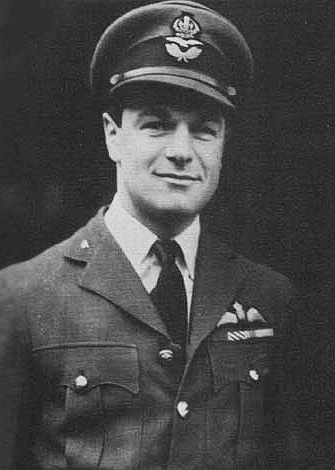