The "Medalla Militar Individual de España" (Indiviual Military Medal of Spain) was introduced by King Alfons XIII. It was awarded for meritorious actions in the presence of the enemy, irrespective of the rank of the recipient.
Initially, the medal measured 42 mm in diameter but later on this was decreased to 37 mm. The medal was suspended from a ribbon, initially 28 mm wide, later 35 with a white background. A 1 mm wide band, colored yellow, runs on both outer edges of the ribbon. In the center of the ribbon a yellow band, flanked by two red bands, each 4,5 mm wide; the whole depicting the national colors of Spain.
On the obverse of the medal is a central circular field, 25 mm in diameter with an effigy of a female figure with angel wings on it, depicting the Godess Victoria. Her left hand rests on a shield with a lions head and in her right hand, she is holding a wreath of laurels. The background shows a view of the sea with the sun setting. The producers mark, Egana is engraved on the waves. This central picture is encircled by an elevated rim with right and left a lion and the Spanish coat of arms on the top. The figures are joined together on the left by a band of laurels, on the right by an oak leaf. At the bottom, the branches are knotted together by a ribbon with the text "Al Merito/Campagne".
On the reverse, the same rim and depiction can be found. In the center however, a Spanish coat of arms is depicted in front of a Johns eagle with a holy shield. The eagle Is flanked by two columns. Beneath the right column there is an object in the form of a star, beneath the left column a symbol of an action.
A clasp with text can be added to the ribbon. 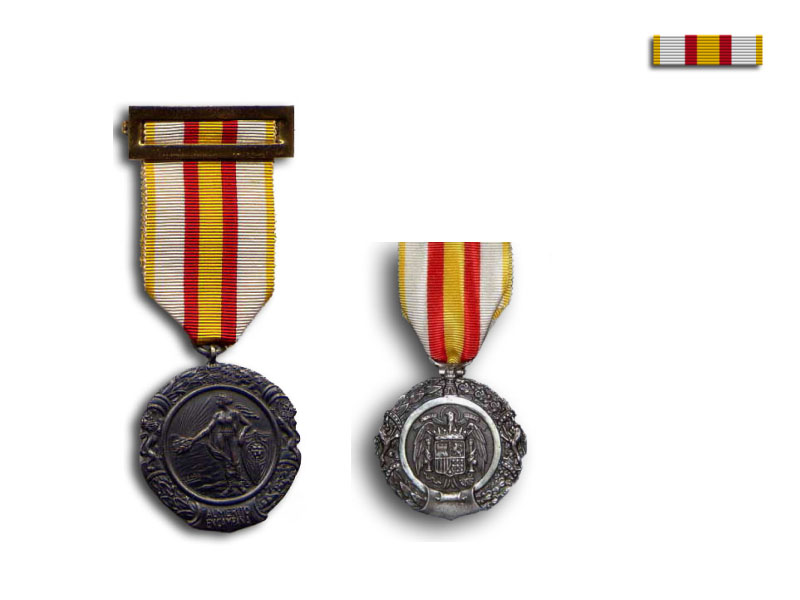