Légion d'Honneur
The Légion d'Honneur, the premier French decoration, was instituted by Napoleon I on May 19th 1802. It is conferred only for gallantry in action or twenty years of distinguished military or civilian service in peacetime.
The original badge was a white-enamelled gold badge with five double-pointed rays; between the arms of the cross is a green enamel wreath of oak and laurel. On the front, in the centre of the badge on a silver ground was the effigy of Napoleon surmounted by a riband of blue enamel which bore the inscription: "Napoléon, Emp. des Français" (Napoleon, Emperor of the French)in gold. The reverse was equal to the obverse but for the Imperial eagle in the centre with the text: "Honneur et Patrie" (Honour and Fatherland) on the riband.
From 1806 onwards, the badge had the Imperial crown on top of it from which it is suspended. The present badge is much the same but on the obverse a female head, which is the symbol of the republic is shown with the riband around it with the inscription: "République Française". The reverse depicts two crossed flags, each tri-colored with the text: Honneur et Patrie"; the crown for suspension has been replaced by a green enamel wreath.
The Order is divided into five classes: Grand Croix, Grand Officier, Commandeur, Officier and Chevalier (Grand Cross, Grand Officer, Commander, Officer and Knight respectively).
The ribbon is coloured bright red with five narrow vertical stripes of darker red of even width evenly spaced across the ribbon. 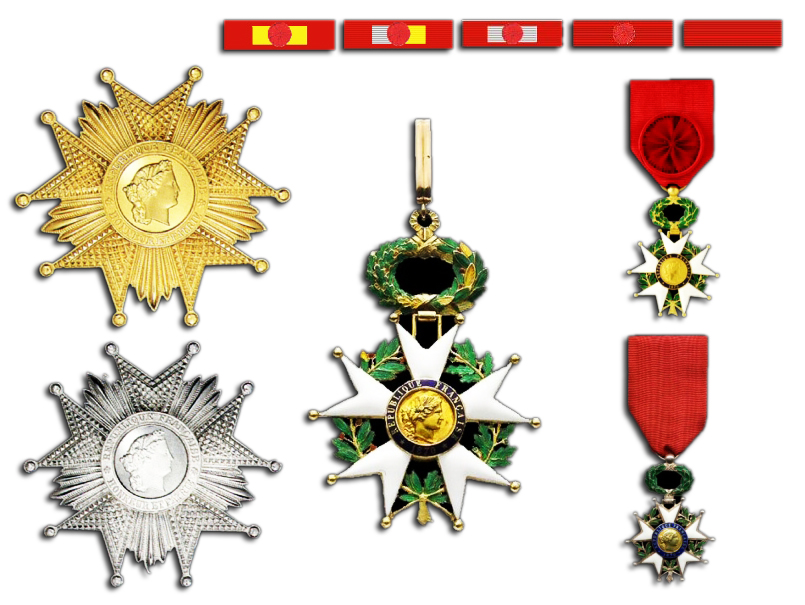