The Conspicious Service Cross was instituted in 1901 by King Edward to "recognize meritorious or distinguished services before the enemy" and could be confered to -acting- warrant officers or subordinate officers of His Majesty's Fleet. Persons could not be nominated unless they had been mentioned in despatches; recipients could add the letters CSC to their names.
In October 1941, the name of the decoration was amended to Distinguished Service Cross and conferment was extended to all Naval and Marine officers below the relative rank of Lieutenant-Commander. The letters behind the recipient's names altered to DSC.
The London Gazette of December 23rd, 1939, announced the King's approval that Commanders and Lieutenant-Commanders of the Royal Navy and officers of equivalent rank also be eligible for the DSC. In 1940, Army and RAF officers serving aboard Merchant Navy vessels also became eligible.
Bars could be awarded for subsequent acts of meritorious service.
The silver coloured award, which has a height of 1.75" and a maximum width of 1.37" has the shape of a cross and depicts the Royal Cypher GRI on the obverse, surmounted by a crown. The reverse of the award is plain apart from the hallmark, with the year of the award engraved on the lower arm. The ribbon is 1.37" wide and consists of three equal vertical stripes, navy blue, white and navy blue. The bar for subseqeunt acts, made of silver with a crown in the centre, is worn on the ribbon
During WW2, 199 DSC's were awarded to Canadians with 34 first and 5 second bars; since 1945 fewer than 100 DSCs have been awarded.
The DSC is the only purely Naval decoration and as such was awarded to the town of Dunkirk for the gallant behaviour of its inhabitants during WW 1. 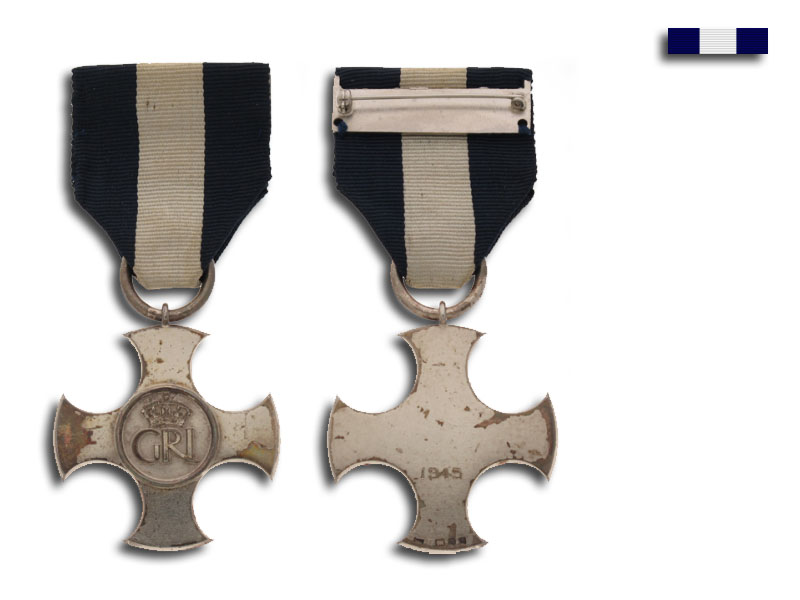