When the Netherlands was liberated in May 1945, the Dutch government in London had succeeded in developing a good and balanced system of both military and civilian decorations. Apart from the already existing Military Order of William, new decorations aroused like the Bronze Lion, the Bronze Cross, the Cross of Merit and the Flyers Cross. Deeds of courage could be awarded in a very efficient way. However there was not a good decoration to award people of the resistance organisations. In surrounding countries the government had already succeeded in filling this gap. The Dutch government also tried to achieve this goal. Because of the fact that there could not be found an agreement whether deeds of resistance could be awarded with an existing Military Decoration or there was to be developed a special decoration, time passed on.

Especially within the Dutch Resistance there was a forceful movement against the decoration of resistance deeds. During war, every deed of resistance was thought to be equal to any other. However, other countries did decorate Dutch resistance people. A significant number of Dutch people were awarded decorations like the British Kings Medal for Courage in the Cause of Freedom and the American Medal of Freedom for their resistance work. Strengthened by this the Dutch government pushed on. Apart from that it was a personal wish of Queen Wilhelmina of the Netherlands that resistance work should be decorated.

A special commission was formed to seek the possibilities. This Raad voor Onderscheiding en Eerbetoon ( Council for Decoration and Honour), with Prof. Ir. W. Schemerhorn, dr. L.J.M. Beel, J.M. de Booy, mr. E.N. van Kleffens, Prof. Dr. P. Lieftinck, mr. J. Meynen and General-major mr. H.J. Kruls, first asked the Grote Adviescommissie der Illegaliteit ( Great Committee of the Resistance, GAC) for advise on the matter. It should not be any surprise that this committee advised negative. On the other hand, another organisation of the former resistance, the former members of the Binnenlandse Strijdkrachten (Inland Forces B.S) that was formed at the end of the war by combining the forces of the many weaponed resistance groups in the Netherlands, did announce they were positive about decorating deeds of resistance. Finally the Dutch government took its own decision and on November 28th 1945, the order was given to the Rijksmunt to develop a new medal. Finally the choice was made for the Resistance Cross which was developed by L.O. Wenckenbach.

By Royal Decree of May 3rd 1946 the Resistance Cross was finally instituted. The formal disruption was: "The Bronze decoration of the Resistance Cross resembled a four armed cross, imbedded on a star of flames and covered with the Royal Crown. On the front one can find St. Joris fighting the dragon. On the arms of the cross are engraved the words Trouw tot in den dood. On the obverse one can find a flaming sword wit two broken chains", all according to article 4 of the Royal Decree. The ribbon is coloured in Crimson Red with two golden orange lines.
Although presenting the decoration to a living person, a compromise was found with the opposing people of the former Dutch Resistance and the decoration was only given to people that already died. Only once this promise was broken, when on July 19th 1946 a Resistance Cross was awarded by Queen Wilhelmina to Gerard Tieman, living in the Blindeninstituut in Bussum (Home for the Blind).

The first Resistance Crosses were awarded by Royal Decree of May 7th 1946 and were given to the relatives on May 9th of the same year. The group of people that was awarded was very carefully chosen from all the different groups of the Dutch Resistance movement. Very high rules were used to make the decoration one of the highest in ranking in the Dutch system, coming only second after the highest, the Military Order of William. The Resistance Cross was also awarded to foreign people for their part in the Dutch Resistance network. On October 24h 1946 the first foreign decorations were awarded to Belgian Resistance Fighters.

One remarkable Resistance Cross must not be forgotten. To commemorate the millions of Jews that were killed during the Second World War, there was to be build a monument in New York. Mr. E.N. Kleffens, then Dutch Ambassador in the United States was asked to be a member of the Commission of Recommendation for the monument to be called the "American Memorial to six million martyred Jews and the Heroes of the Warsaw Ghetto Battle". Kleffens was asked to present a decoration as forms of publicity for the monument. By his doing a Royal Decree no.4 was announced on October 17th 1947, giving a Resistance Cross to the "Unknown Jewish Soldier of the Warsaw Ghetto who died for the Freedom of all People". Although the monument never was finished, on the place of the monument in the Riverside Park a memorial stone was erected with the lines: "This is the site for the American Memorial to the heroes of the Warsaw Ghetto Battle April-May 1943 and to the six million Jews of Europe martyred in the cause of human liberty". 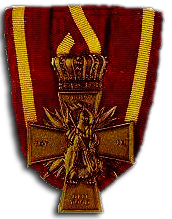