The War Commemorative Medal 1914-18 was instituted on July 21st 1919 for them who fought during World War One within the Belgian Forces and were eligible for the criteria to the Victory Medal.

The triangle shaped bronze medal shows on the front a helmed soldier. The helmet bears the decoration of a laurel. In the lower corners the year data '1914' and '1918' are shown. The top is decorated with a climbing lion with on its left a oak leaf and on its right a laurel.
The back bears the text "MEDAILLE COMMEMORATIVE / DE LA CAMPAGNE / 1914-1918 / HERDENKINGSMEDAILLE / VAN DEN VELDTOCHT", crowned with the king's crown and flanked by an oak leaf on the right and a laurel on the left.

The ribbon of the decoration can be shown with:
- crown (volunteers)
- silver bar (for each front stripe received)
- gilded bar (for each five silver front bars received)
- red enamel cross (for each received wound stripe)
- anchor (naval personnel)
- silver star (discharged for wounds)
- bar "1916-R-1917"
- bar "1916-R-1918"
The first front bar could be received after one year of frontline service, each next bar after the following 6 months frontline service.
Naval personnel and fishery personnel were allowed to place the anchor on the ribbon when they also were awarded the Maritime Decoration. For members of the Expeditionary Corp Russia the bars "1916-R-1917" or "1916-R-1918" were received. 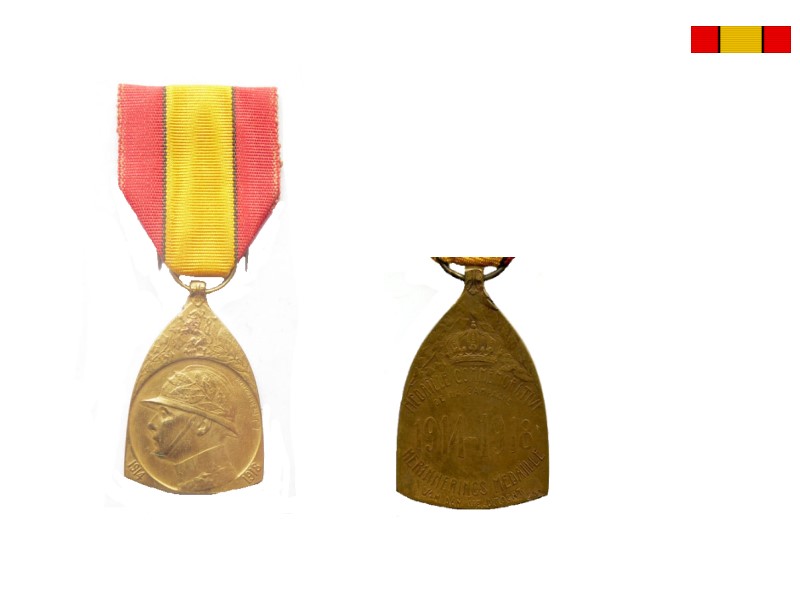