Johann Ferdinand Schörner was, among other decorations, decorated with the Pour la Merite (5th December 1917, Leutnant der Reserve; Führer 12. / Bayerischer Leib-Infanterie-Regiment) during the First World War. In Hitler's Last Will, Schörner was to be appointed to Oberbefehlshaber des Heeres.

Before dawn on the 06.04.1941 Generalmajor Schörner (commander of the 6. Gebirgs-Division) and his troops succeeding in overrunning the enemy outposts on the snow covered Belaaica mountain through a surprise thrust. There two enemy bunker lines of the Metaxas Line were penetrated, and before long the whole division was in position in the valley before the enemy line at the Krusa mountain.

Later on the 08.04.1941, and on his own initiative, Schörner launched a surprise attack against the Allied forces on the northern part of the Krusa mountain. He and his men successfully ejected the defenders from this area and advanced towards Salonika. In conjunction with the advancing 2. Panzer-Division, these actions contributed significantly to the fall of Greece/Macedonia.

The following press article (dated 21.02.1944) describes why Schörner would receive the Oakleaves

Schörner has been in command of the Nikopol bridgehead since the 25.11.1943. The Wehrmachtbericht of 18.02.1944 goes into further detail as to the achievements of Schörner and his men in this area in their battles against a relentless enemy. Great difficulties were encountered during the evacuation of the bridgehead (which began on 04.02.1944) due to the extremely bad roads and terrain. Through the leadership and skillful handling of the commanding general (who could always be found at the hot spots of the front), as well as the bravery and dedication of his men, it was possible to carry out the planned withdrawal movements successfully.

The following press article (dated 01.09.1944) describes why Schörner would receive the Swords

Generaloberst Ferdinand Schörner is the commander-in-chief of our troops fighting in the Courland region, against whom the surge of enemy forces from the east has failed to overcome for many weeks. Despite already having been cut off once completely, our troops in Courland have defied all the odds as the cornerstone of the Eastern front. They embodied the spirit of their commander-in-chief, and his skillful leadership has guided them to a victorious outcome over the course of incessant battle against the hordes of enemies.

Awarded for his leadership during the battles of Army Group North in late 1944. On 14.09.1944 the Soviets launched a major assault on the German forces still fighting in Estonia and NE Latvia. Under Schörners leadership these soldiers were able to withdraw from these territories without significant loss. Schörner also commanded Army Group North during the first three battles of Courland, throughout which the Soviets were only able to make minor gains against the German positions (and then only after heavy losses). Schörners iron resolve and frontline presence no doubt played a role in ensuring the Soviet defeat here, and for overseeing one of the last German triumphs of the war he would receive the Diamonds to his Knights Cross.

with crown and swords

Officer to the Order of Merit 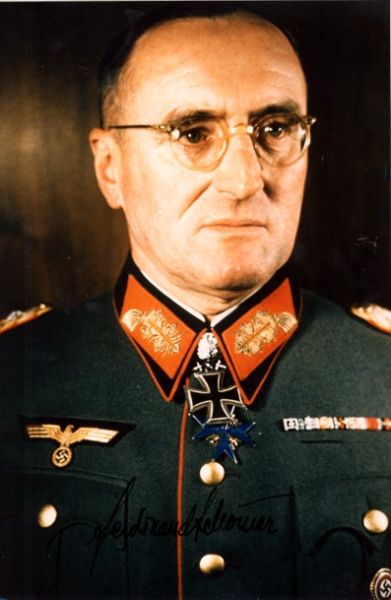