Awarded for his actions during the pursuit battles of the 14. Panzer-Division towards the Lower Don in mid-1942. He particularly distinguished himself on the 23.07.1942 in the area west of Nowotscherkask. A week later, on the 30.07.1942, his Abteilung destroyed a Soviet tank unit near Kutejnikowskaja.

At the end of October 1943 Langkeit and his armoured Kampfgruppe contributed significantly to recapturing the previously lost Ingulez sector, reaching the line Nowo Iwanowka - Krassny. Later on the Kampfgruppe launched a new advance on the 20.11.1943, and in a fierce tank battle it destroyed 22 Soviets tanks.

On the 26.11.1943 the same Kampfgruppe attacked from Protopopowka towards the north, blocking the three important roads from Kossowka towards the west and destroying 21 hostile tanks. In this time a Soviet infantry attack launched in strength of about two regiments was similarly crushed.

Langkeit would be decorated with the Oakleaves for his accomplishments during this time. 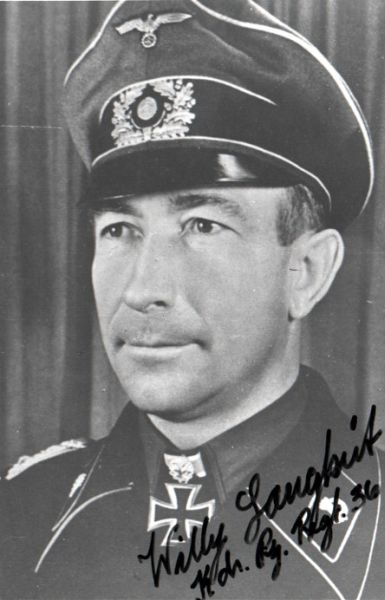