"During the closing of the ring around Demjansk by the Russians on the 03.02.1942, SS-Oberführer Priess was serving as the artillery Commander within the Gruppe Eicke and had at his disposal all of the operational artillery Batteries.

SS-Oberführer Priess launched attacks again and again in the most bitter cold against enormous Russian superiority in men and material. With only his few Batteries and nimble leadership. as well as his quick personal reactions, he was able to smash the enemy.

In the fighting against enemy tanks, they had to use the artillery employed in the direct fire mode, as they were lacking other defensive weapons. They broke and annihilated the enemy infantry. In this time SS-Oberführer Priess was always to be found at the most dangerous places, and was an example to his men through his high personal achievements.

It is certain that without the aid of the always-reliable artillery, together with the combination of the infantry, that the defeat of the enemy here would have been impossible.

In the 41krn long positions of the cut-off Gruppe Eicke, they did not cede one foot of ground to the Russians. The fight ended successfully and the 'Fortress Demjansk' was held under the most difficult of circumstances. This was a success of decisive importance, one that we owe to the imaginative leadership and heroic, exemplary will of SS-Oberführer Priess. His successes formed an important basis for the later breaking of the ring around Demjansk.

I please ask for the award of the Knight's Cross to the Iron Cross for SS-Oberführer Priess in recognition of his decisive action."

Awarded for his leadership of the SS-Totenkopf Division during the Third Battle of Kharkov and in the retreat battles which followed it. His Knights Cross recommendation reads as follows

The excellent battle performance of the SS-Totenkopf Division in attack and defense, not least the complete defensive success on 02.09.1943 that result in the destruction of 72 tanks, must be credited to the personal and enthusiastic devotion to duty and example of SS-Brigadeführer Priess. He is the lead fighter of his brave Division.

The award is warmly supported. The exploits of the Division and its' Commander deserve special recognition."

Awarded the Swords for helping to cover the retreat of German forces during the fighting in the Ukraine in early 1944. His recommendation reads as follows

"SS-Brigadeführer Priess, Commander of 3. SS-Panzer Division "Totenkopf", has been known to me for a long time as an especially proven and resolute officer. In the last round of combat he especially distinguished himself in the Balta-Birsula area. In this time his division was scattered, partially encircled to the right and left, and had its rear guard connections cut off. Through his clear leadership and independent decision making, he contributed considerably to holding the Balta-Odessa railway line for a long length of time. This in turn enabled the disengagement of the elements of the Korps and neighbouring Armee situated farther to the east. Always remaining in the front line, he stood firm with his division despite the heaviest challenges to its security. He firmly and securely guided them and provided a great role model for his men." 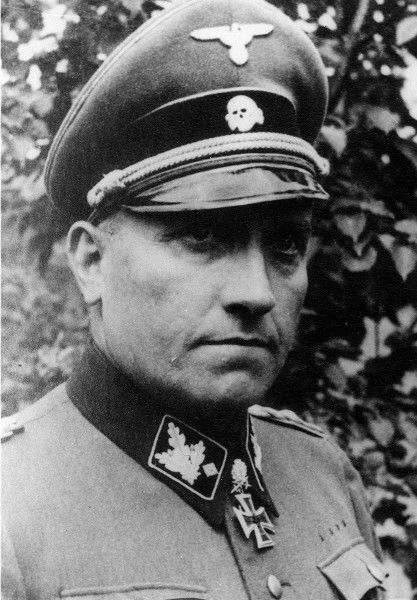