Oberstleutnant Mikosch fearlessly led his Bataillon through fortified and toughly defended enemy positions in order to relieve the brave conquerors of Fort Eben-Emael. It was the successful completion of this deed which enabled the Fort to definitively come under our control. Such high recognition of this action is simultaneously tribute to the efforts and outstanding achievements of the entire German Pionierwaffe.

Following his Kampfgruppes retreat from the Kalatsch bridgehead, Mikosch and his troops reached the Chir railway station on the 24.11.1942. Here they were subordinated to the staff of the 384. Infanterie-Division, which at the time commanded several other Kampfgruppen during the initial German efforts to patch up the front following the Soviet Operation Uranus.

With the courage of desperation, this Kampfgruppe fought near Werch. Tschirskij (in the Chir-Don triangle) for the next four weeks against Soviet tank and infantry attacks. On the 14.12.1942 the newly arrived Soviet 7th Tank Corps launched a fresh attack. With 30 tanks it broke through the German positions on both sides of Werch. Tschirskij and even penetrated into the village itself. In the ensuing battle Kampfgruppe Mikosch was able to destroy 20 enemy tanks despite losing almost all of its anti-tank weapons in the process. The situation was however still critical for the Kampfgruppe, which could not hold on much longer. However the Armee finally decided to pull back the front at the last minute and evacuate the Chir-Don triangle on the night of 15.12.1942.

The steadfastness of Kampfgruppe Mikosch had been crucial in the German defensive efforts up to this time. Through its efforts the Soviets were prevented from rolling up the entire Chir defensive front towards the west. In recognition of his efforts during this most difficult time, Mikosch would be decorated with the Oakleaves. 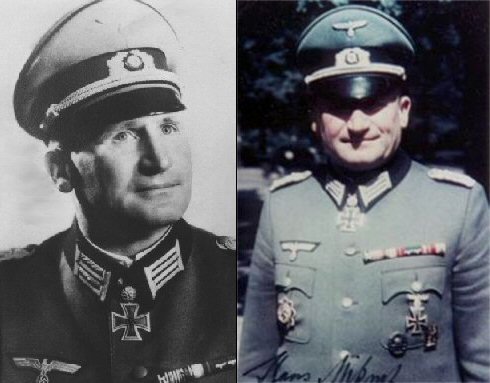