Citation:
"On the 6th January, 1943, at Donbaik, Mayo Peninsula, Burma, when two Carriers had been put out of action, Havildar Parkash Singh drove forward in his own Carrier and rescued the two crews under very heavy fire. At the time, the crews of the disabled Carriers had expended their ammunition and the enemy were rushing the two disabled Carriers on foot. This N.C.O.s timely and courageous action, entirely on his own initiative, saved the lives of the crews and their weapons. On the 19th January, 1943, in the same area, three Carriers were put out of action by an enemy anti-tank gun and lay on the open beach covered by enemy anti-tank and machine-gun fire. One of these Carriers was carrying the survivors of another Carrier in addition to its own crew. Havildar Parkash Singh, on seeing what had happened, went out from a safe position in his own Carrier, and with complete disregard for his own personal safety, rescued the combined crews from one disabled Carrier, together with the weapons from the Carrier. Having brought the crews to safety, he again went out on the open beach in his Carrier, still under very heavy anti-tank and machine-gun fire and with the utmost disregard for his personal safety, dismounted and connected a towing chain on to a disabled Carrier containing two wounded men. Still under fire, he directed the towing of the disabled Carrier from under enemy fire to a place of safety. Havildar Parkash Singhs very gallant actions, entirely on his own initiative, were an inspiration to all ranks both British and Indian." 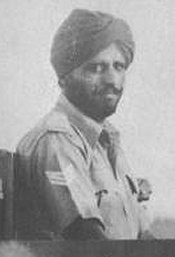