Sidney Bates was born on June 14th, 1921 as the son of Frederick and Gladys May Bates of Camberwell, London.
He entered service with 1st Battalion, Royal Norfolk Regiment in 1940.

Citation:
"In Nofrth-West Europe on 6th August, 1944, the position held by a battalion of the Royal Norfolk Regiment near Sourdeval was attacked in strength by loth S.S. Panzer Division. The attack started with a heavy and accurate artillery and mortar programme on he position which the enemy had, by this time, pin-pointed.
Half an hour later the main attack developed and heavy machine-gun and mortar fire was concentrated oh the point of junction of the two forward companies.
Corporal Bates was commanding the right forward section of the left forward company which suffered some casualties, so he decided to move the remnants of his section to an alternative position whence he appre- dated he could better counter the enemy thrust. However, the enemy.wedge grew still deeper, until there were about 50 to 60 Germans, supported by machine:guns and mortars, in the area occupied by the section. Seeing tnat the situation was becoming, desperate, Corporal Bates then seized a light machine-gun and charged the enemy, moving forward through a hail of bullets and splinters and firing the gun from his hip.
He was almost immediately wounded by machine-gun fire and fell to the ground, but recovered himself quickly, got up and continued advancing towards the enemy, spraying bullets from his gun as he went. His action by now was having an effect on the enemy riflemen and machine gunners but mortar bombs continued to fall all around him. He was then hit for the second time and much more seriously and painfully wounded.
However, undaunted, he staggered once more to his feet and continued towards the enemy who were now seemingly nonplussed by their inability to check him. His constant firing continued until the enemy started to withdraw before him. At this moment, he was hit for the third time by mortar bomb splinters - a wound that was to prove mortal. He again fell to the ground but continued to fire his weapon until his strength failed him. This was not, however, until the enemy had withdrawn and the situation in this locality had been restored.
Corporal Bates died shortly afterwards of the wounds he had received, but, by his supreme gallantry and self sacrifice he had personally restored what had been a critical situation."

Awarded posthumously.
Corporal Bates Victoria Cross is publicly displayed at the Royal Norfolk Regiment Museum in Norwich, Great Britain.
At Pavee, a monument has been erected near the hamlet of Burcy to comemmorate Bates action. 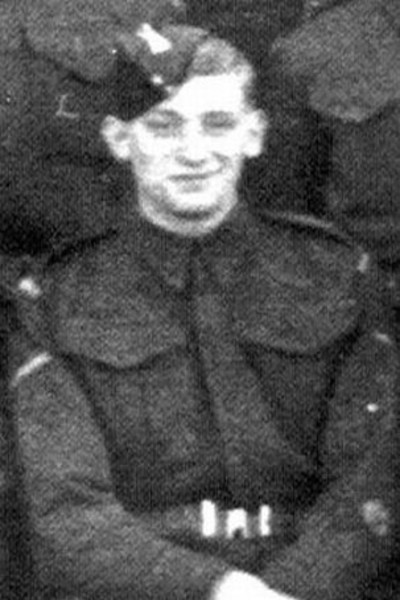 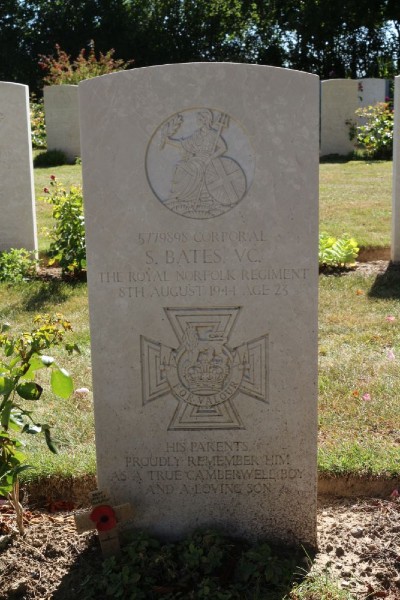