Guy Granville Simonds was born on April 23rd 1903 in Bury St. Edmunds in England. He was the son of a British Army officer who emigrated to Canada. Simonds studied between 1921 and 1925 at the Royal Military College of Canada in Kingston. When the 2nd World War began he was a major in General Mc. Naughtons staff, who was in command of the 1st Canadian Division. This division arrived in England in December 1939. In July Simonds served for a few months with the from Dunkirk (France) evacuated 1st Field Regiment of the Royal Canadian Artillery until he was asked in November 1940 by General Mc. Naughton to set up an intensive trainings program for Canadian officers. Simonds first combat experience came in Italy, when he had to take over the command of the 1st Canadian Division in Sicily after General Salmon died in April 1943. Here he took part in the battles for Nissoria, Agira and Regalbuto. Due to his convincing leadership during these battles he was noted by General Bernhard Montgomery and thru this he also became the youngest General in the Canadian Army. Afterwards he was for a short time the commander of the 5th Canadian Army, until he was send back to England in January 1944 to take over the command of the 2nd Canadian Corps. With this Corps he landed on UTAH-Beach and soon afterwards they were involved in the heavy battle of Caen. During the battle of Caen and the battles for Normandy afterwards he gained great respect for his outstanding armoured infantry and anti tank tactics. Shortly after the fall of Caen, General Crerar became very ill and Simonds had to take over the command of the 1st Canadian Army just before the Battle of the Scheldt began. Simonds was 41 years old and was know as a ruthless man with a great sense of responsibility. After the heavy fighting for the Scheldt pocket Simonds gave the command of the 1st Canadian Army back to General Crerar and stayed till the end of the war under General Crerars command. After the war General Simonds stayed in the Army and became a very respected teacher at the Royal Military College of Canada. Simonds passed away on May 15th 1974 in Toronto.

General citation: "For outstanding zeal and ability."
Recommendation:
"After commanding with distinction the 1st and 5th Canadian Division in Italy, Lieutenant-General Simonds was returned to England and appointed to command the 2nd Canadian Corps in January 1944.
Throughout the months of intensive preparations preceding the assault, Lieutenant-General Simonds displayed organizing ability of the highest order, with the result that the force placed under his command has been able, from the time of its arrival in France, to engage the enemy in continuous and successful encounter.
The success of the operations which led to the capture of Caen and the further progress of the Canadian, British and Polish forces under his command in the face of the most determined opposition, culminating in the decisive actions which brought about the fall of Falaise, are largely in consequence of Lieutenant-General Simond's sound appreciations, careful planning, skillful execution and resolute leadership."

"In recognition of gallant and distinguished services in Normandy."

"Lt- Gen G G Simonds as commander of 2nd Canadian Corps which was first committed as such in the Normandy campaign early in July 1944, fought his corps with great distinction throughout the battle of France. Many of the troops coming under his command had had no previous battle experience but this officer's gifts of organisation and leadership and his tactical ability enabled him to weld his corps into a firm class fighting machine at CAEN, FALAISE and in the pursuit through Northern France was an important factor in driving the German Armies from the soil of France."

Dutch citation:
"For the excellent services rendered by the aforesaid officers to the Kingdom of the Netherlands, in the preparation and execution of the operations of the Canadian armed forces to liberate the territory in EUROPE in the period from September 1944 to May 1945."

English recommendation:
"During the operations to clear the West Scheldt and the northeastern approaches to the port of Antwerp, Beveland, Walcheren and Netherlands territory up to the River Maas, Lieutenant-General Simonds, as Acting Commander First Canadian Army, distinguished himself by his skilful tactical direction of the military forces under his command and able coordination of the air and naval forces operating in support.

Subsequently, through the winter and spring, he directed the operations of 2 Canadian Corps in eastern and northern Holland with outstanding ability and aggressiveness to complete, in conjunction with 1 Canadian Corps, the full liberation of the Netherlands.

His efficient control of the Military Civil Affairs policy within his Corps area ensured the rapid and effective reorganization of the local civil administration and assisted materially in the rehabilitation of the Netherlands economy."

"Lieutenant General Guy Granville Simonds, C.B., C.B.E., D.S.O., served as General Officer Commanding the 2nd Canadian Corps throughout the campaign in Northwest Europe and acted for approximately six weeks of that period as General Officer Commander-in-Chief, First Canadian Army. He consistently showed exceptional skill in his appreciation of particular situations, in his ability to formulate simple and sound tactical plans and in his determination to carry out efficiently the tasks allotted to him. The troops under his command engaged in some of the hardest fighting, established a most enviable records in battle, due in large measure to his inspiring leadership. General Simond's distinguished services were a notable contribution to the Allied Victory on the Continent."

"In recognition of gallant and distinguished services in North West Europe." 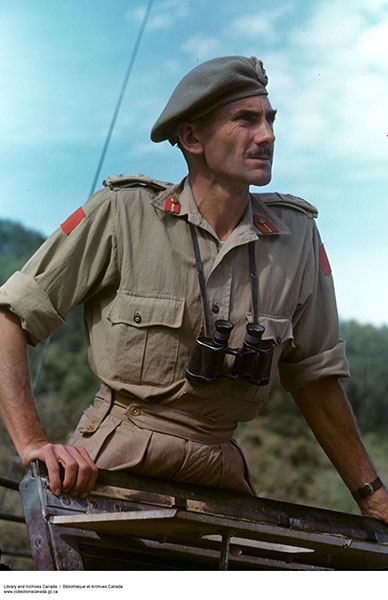