Abel was 1st Watch Officer of U-154 under the command of Oskar Kusch. Kusch had given Abel a poor review after their first patrol and rated him unfit for command. This deeply angered Abel, who along with the boat's other officers began to conspire against their commander (who was well respected by the crew).

On Christmas day 1943, just after returning to base after their second patrol, Oskar Kusch actually gave his 1WO a "good review" (stating that while he was an "inflexible, rigid and one-sided officer" of "average talent" he was, nonetheless, suitable for U-boat commander training). This assessment shocked and further infuriated Abel, who on 12 Jan filed a formal complaint accusing Kusch of sedition, followed by another on 25 Jan accusing him of cowardice. Kusch was arrested on 20 Jan and a court martial convened on 26 Jan. The verdict, a death sentence, was delivered on 29 Jan 1944 (Blair, 1998).

Having a doctorate in law, Abel would have known that his actions would at the least result in a court martial and heavy punishment, but more likely a death sentence for his commander.

Oskar Kusch was executed by firing squad on 12 May 1944 - having just turned 26 years of age. The court decided to sentence him to death even though the prosecutor had only asked for 10 years imprisonment. A fellow U-boat commander, Otto Westphalen had been one of those deciding the sentence. (Rust, 2001).

Oskar Kusch's record was wiped clean in 1996 and he was deemed a victim of Nazi injustice. This case, however, continues to raise arguments, with some believing the charges against Kusch were true (Rust, 2001).

Dr. Abel himself had died three weeks before Oskar Kusch, when his first command, U-193, was sunk on its first patrol. 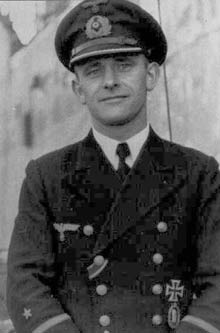