Ended the Second World War as Konteradmiral and served after the war with the same rank in the Bundeswehr.

Kapitän zur See Johannesson has been a destroyer captain since the beginning of the war, commanding the destroyer Erich Steinbrinck up until April 1942. In this capacity he received the Iron Cross Second Class, the Iron Cross First Class on the 13.12.1939 and was recommended for the Knights Cross on the 04.11.1941 by the Leader of Destroyers.

In this previous recommendation the Leader of Destroyers wrote (among other things) that Johannesson had participated in 24 mine/commerce related operations while covering a cumulative total of 30000 knots in these missions. 5 of these were offensive mine-related operations along the English coast. He particularly distinguished himself on the 17.10.1940 in a battle that saw German destroyers face overwhelming English naval forces in the English Channel. Despite having sustained boiler damage, and being under heavy enemy fire, Johannesson commenced a torpedo attack on his own initiative that resulted in an English cruiser being torpedoed. This attack forced the enemy to give up their pursuit of the German destroyers. In place of the Knights Cross he was instead awarded the German Cross in Gold for this.

Since May 1942 he has been the captain of the formerly Greek (now German) destroyer Hermes. He worked towards the damaged ships commissioning with great energy and brought it to an operational state in an exceedingly short time. Without either testing or prolonged training time the destroyer has since been in almost continuous convoy escort duties. By now it has participated in 19 round-trip convoy escort missions to Crete and the Dardanelles and another 13 to Africa. It has also been involved in 2 mine operations, one of which was south of Crete.

Despite numerous submarine and air attacks, Johannesson has led his convoys to their destinations in an intact state on every occasion. Meanwhile other convoys operating in the same time period lost a great number of freighters sunk. He linked up with a heavily damaged and barely seaworthy German U-Boat 120 knots south of Crete (near Alexandria) and brought it safely back into harbour. By his secure escort of numerous freighters Johannesson has contributed majorly to the prosecution of the war. Of particular significance were the following two escort missions to Africa

Escort of the 6000 GRT tanker Rondine with its cargo of aircraft fuel from Suda to Tobruk (23.-24.09.1941): The tanker had suffered mechanical failures soon after leaving Suda. Even though turning around seemed the obvious response, Johannesson ordered it to proceed in light of the grave fuel shortage in Africa. During the full-moon night he fended off several enemy bombers and torpedo planes and brought the valuable ship to its destination successfully. For this operation he received a special recognition from the supreme commander of the Italian navy.

Escort of the freighters Portofino, Gualdi and Col di Lana from Piräus to Bengasi (02.-04.11.1942): This convoy, coming in after the start of the British African offensive, was of vital importance. It carried 7700 tons of gasoline, 1400 tons of munitions, 3800 tons of food along with various additional supplies. It was especially heavily escorted by the destroyer and three torpedo boats. The leadership lay with the only German destroyer, while the other 8 vessels flew the Italian flag. The convoy was detected by enemy aerial reconnaissance during the day. Kapitän zur See Johannesson made the tactically correct decision to split up the convoy after nightfall, before the enemy aerial attack intercepted the convoy. He would move towards the west for the duration of the night with one freighter and two security vessels. The enemy aerial attack would now only strike the part of the convoy led by him.

Soon afterwards the English force of numerous bombers did indeed attack, however they were split up by defensive fire and smokescreens laid by special buoys and the ships themselves. However by cruising along the edge of the convoy at high speed with heavy smoke cover, he was able to get most of the enemy bombers to go after the best and most visible target, his own destroyer. In the thick smoke a torpedo aircraft dropped its load, but the skillful maneuver of Johannesson meant that the torpedo barely missed the destroyer and the freighter. He would reach his destination port with all vessels undamaged.

During all operations Johannesson has shown himself to be a bold and dutiful officer, who simultaneously possesses outstanding nautical and tactical abilities.

Because of his performance during the entirety of his joint operations with the Italian Navy he has proven to be a man who can be relied upon. 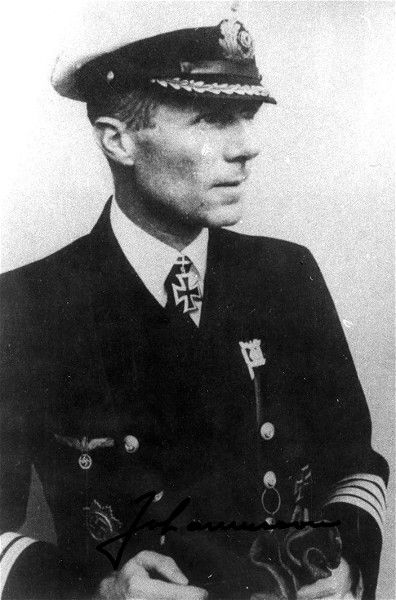