In June 1944 Bacherer was commanding the 1049th Infantry Regiment on the Western Front when Major General Rudolf Stegmann, commander of the 77th Infantry Division was killed in American air raid. Bacherer was promoted to command the division and enjoyed some early successes, capturing 250 American prisoners on 17 June and the following day broke through US lines to link up with the remnants of the LXXXIV Corps near La Haye-du-Puits. The Division however, which was already understrength when Bacherer made his advance soon suffered heavy losses as the Americans forged ahead. Bacherer was captured by American forces following the fall of Saint-Malo in 1944 and was held as a POW until 1947.

On the 11.08.1943 Oberst Bacherer and his Regiment managed to capture almost all the Soviet strongpoints in his assigned sector, which was located within the Suchinitschi area. Two days later the Regiment came out of the forested area around Nogaja, passed through Ukolizy and reached Mysin. Here the Regiment succeeded in repulsing several Soviet tank-supported attacks before finally occupying the 5 km line MysinSmetskijeWys on the 15.08.1943. Oberst Bacherer would be awarded the Knights Cross for his Regiments successes in battle during this time.

The following excerpt (dated 20.08.1944) describes why Bacherer was awarded the Oakleaves

He was a regimental commander in the 77. Infanterie-Division as it fought on the Cotentin peninsula during the middle of June 1944. In this time the Division became trapped in the peninsula after the Americans had broken through to its western coast. He took over leadership of the divisional Kampfgruppe after the fall of the divisional commander, and in this capacity he broke out towards the south as ordered. Having reached strong enemy blocking positions, he gave the order to break through despite the reservations of his commanders and the extreme exhaustion of his troops. He managed to skillfully deceive the enemy as to his axis of attack and then personally lead his Grenadiers through the enemy lines. Fighting with exemplary bravery this whole time, he succeeded in establishing contact with the German units to the south. 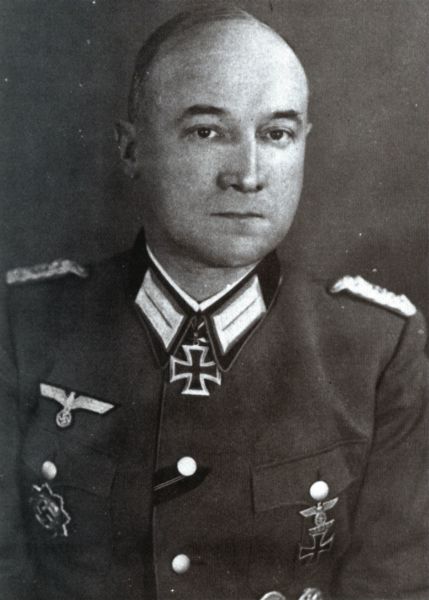