Fritz Backhauss joined the 11th / I.R. in 1934. 4 and then moved to 2. / I.R. in 1935. 25. After attending the Munich War School, in 1936 he received a command to attend a weapons course at the
Infantry School.
From 1937 he is in the 11. / I.R. 13, changed to 1st Company in 1939 and took part in the Polish campaign as a platoon leader.
After the end of the fighting, in 1940 he took over the leadership and then command of the 3rd (Jäger) Company of the regiment, which was then renamed the 13th Mountain Jäger Regiment.
In action in the West and in the Balkans campaigns, he was also in the fight against the Soviet Union from 1941 onwards.
There he was appointed deputy leader of the 1st battalion in January 1942 and then took over the command of the field replacement battalion 94 in July 1942 and was leader of the march battalion 4/4 from August to September.
In October he takes over the leadership of the III. Battalions.
In 1943 he was appointed commander of the III. Battalion appointed.
In 1944 he and his battalion closed a break-in point of approx. 50 tanks with quickly gathered forces in a counterattack, while fighting off the advancing infantry with the strength of a regiment in heavy fighting.
On December 15, 1944, he was transferred to the Mittenwald mountain hunter school for training as a teaching group commander. At the end of the war he was the leader of a combat group in the Innsbruck area and was captured by the US on May 10, 1945, from which he was released on June 21.
After a short period as a civilian, he joined the Bundeswehr as a major in 1956. From June he was lecture director at the infantry school in Hammelburg and in 1958 took over the post of chief inspection officer at the infantry school there. From 1966 he is a staff officer in the PSA-BW Cologne.
In 1956 he joined the postwar Bundeswehr serving as an Oberstleutnant until his death on 7 March 1971 in a military hospital in Koblenz.

The following divisional order of the day (dated 15.02.1944) describes why Backhauss was awarded the Knights Cross

The Führer and Supreme Commander of the Wehrmacht has awarded the Knights Cross of the Iron Cross to Major Backhauss, commander of the III./G.J.R. 13.

An enemy tank brigade with 50 tanks broke through the main line of battle and left a gaping hole in its wake. Thusly, on the night of the 11./12.01.1944, Major Backhauss led a counterattack on his own initiative with some hastily assembled and weak elements of his Bataillon. He managed to close the gap with his brave Bataillon and then repel the follow-up enemy infantry that came in regimental strength. This action eliminated the striking power of a potentially dangerous thrust into the deep flank of the 1. Infanterie-Division and those friendly Divisionen in combat east of Vinnitsa. Such an achievement was of decisive importance for the continued operations in the area.

I congratulate Major Backhauss on receiving this high award in the name of the entire Division.

This feat of arms took place between Strutnika (7 km southwest of Gaissin) and Nowo Greblija in the right divisional sector south of Jassenki. 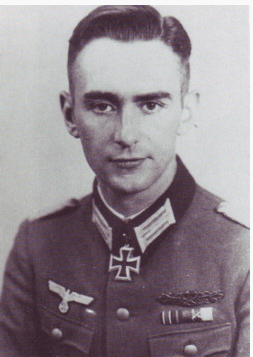