Citation:
"In the Kaladan Valley, Burma on 15 / 16 December 1944, Havildar Umrao Singh was in charge of one gun in an advanced section of his battery when it was subjected to heavy fire from 75 mm guns and mortars for one and a half hours prior to being attacked by two Companies of Japanese. When the attack came he so inspired his gun detachment by his personal example and encouragement to fight and defend their gun that they were able to beat off the attack with losses to the enemy.
Though twice wounded by grenades in the first attack, he again held off the second enemy attack by skilful control of his detachment's small arms fire, and by manning a Bren gun himself which he fired over the shield of his gun at the Japanese who had got to within five yards range. Again the enemy were beaten off with heavy losses. Third and fourth attacks were also beaten off in the same manner by the resolute action and great courage of Havildar Umrao Singh. By this time all his gun detachment had been killed or wounded with the exception of himself and two others.

When the final attack came, the other gun having been over-run and all his ammunition expended, he seized a gun bearer and calling once again on all who remained, he closed with the enemy in furious hand-to-hand fighting and was seen to strike down three Japanese in a desperate effort to save his gun, until he was overwhelmed and knocked senseless. Six hours later, when a counter-attack restored the position, he was found in an exhausted state beside his gun and almost unrecognisable with seven severe wounds, and ten dead Japanese round him.

By his personal example and magnificent bravery Havildar Umrao Sing set a supreme example of gallantry and devotion to duty. When recovered, his gun was fit to fire and was in fact in action again and firing later that same day."

Later promoted to the rank of Subadar-Major. 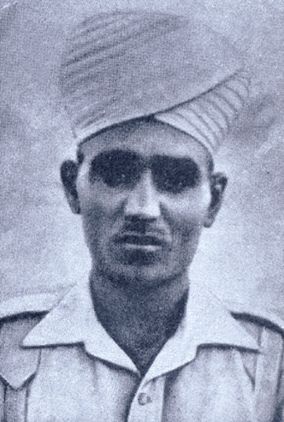